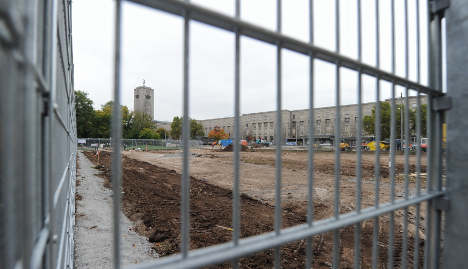 Stuttgart station fenced off as a construction site. Photo: DPA

The TNS poll conducted last week for Der Spiegel suggested the Greens would get 32 percent of votes, while the Social Democratic Party would get 19 percent, raising the possibility of a Green-led coalition.

The poll showed that 46 percent of people are in favour of, and 43 percent against, the project, which will cost €7 billion to revamp the rail links and rebuild Stuttgart station as an underground link. Yet a majority of those asked by pollsters said they wanted to see a referendum over the project, which will also affect a large chunk of the city centre.

Mappus has tried to expand the significance of the Stuttgart fight over the multi-billion construction project against which tens of thousands of locals have been protesting for weeks. More than 100 people were injured recently when police used water cannon and tear gas against the demonstrators.

“This is about the question of can I go about a project in Germany on the basis of legal certainty and trust in contracts,” said Mappus in the business magazine Wirtschaftswoche. Foreign companies have been astounded and German firms shocked at the fight over the projects, he said.

He called for a discussion about what was still possible in the country, saying Germany must decide in which it wants to develop.

Heiner Geißler, a veteran CDU politician brought in to mediate between the project leaders and demonstrators said he was optimistic that first negotiations could take place next week, despite the heated atmosphere on the streets of Stuttgart.

His first act as mediator was to announce a halt to building work, which was almost immediately contradicted by Mappus and Rüdiger Grube, head of Deutsche Bahn.

Geißler said on Saturday that building work would indeed stop.

“The phrase ‘building stop’ has taken on a deep psychological meeting such as ‘God be with us’ among those who favour the project,” told local paper Stuttgarter Nachrichten.

“But we are all agreed, we are really all agreed, even Bahn head Grube, with whom I have just now spoken again – that during mediations, the building work will not be continued and no building contracts will be issued. There is complete unity on this.”

He said he had never spoken of a general halt to building work, just of a temporary stop during negotiations.

“I cannot demand that we negotiate while we can see through the window on the other side of the street that diggers are being used and cranes swing into action over the building noise. We could bury our efforts straight away,” he said.

Any costs from delayed contracts have to be swallowed, he said. And he said he expected all relevant documents and data to be handed over to him – otherwise the mediation would be abandoned. He is set to meet with Grube this weekend and with the group opposing the project on Tuesday.

SPD leader Sigmar Gabriel, perhaps with an eye on poll results, pulled back slightly from his previously full support for the project, admitting to local newspaper Stuttgarter Zeitung on Saturday, “there are many in the SPD who do not believe the project is financeable.”

He said his party still sees the project as a big chance for the city and state, but put himself firmly behind calls for a referendum on whether it should continue. He said Mappus was simply waiting and hoping the street protests fade out before the election, which he said was a dumbing-down tactic.