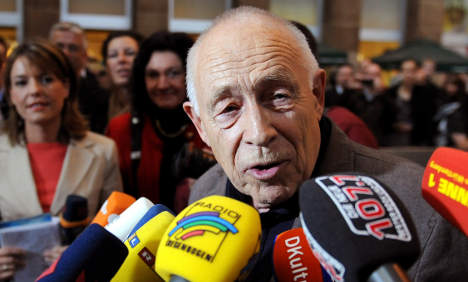 The state premier’s Stefan Mappus said he doubted that many opponents of the massive revamp of Stuttgart’s main train station, including the environmentalist Greens, even wanted to reach an agreement, saying the situation had become extremely tense.

“For some, including some within the Green party, this is not just about the train station,” Mappus told daily Bild, accusing the party of failing to achieve their aims within the state parliament and taking their cause to the streets.

Stopping the €4.1-billion overhaul of Stuttgart’s most important rail link would cost more than €1 billion, Mappus told the paper, adding that the expensive undertaking was a good investment.

“Such rail projects shape the economy for more than 100 years,” the conservative Christian Democrat said.

Meanwhile the Greens’ state parliamentary group leader Winfried Kretschmann questioned the sense of mediation between the two sides if Mappus refused to alter a single aspect of the building plans.

The Greens want to discuss the rising costs and viability of Stuttgart 21, he told daily Berliner Zeitung, adding this would be impossible if Mappus did not change his behaviour.

“It’s about alternatives, not denial,” he said.

The two sides were thrown into confusion on Thursday evening, when mediator Heiner Geißler, who was recently appointed by the state government, would be suspended until December.

Opponents have demanded a halt to construction as a prerequisite to mediated talks, but the state government immediately denied that construction would stop, saying the suspension was limited to some tree-clearing in the city centre and demolition of parts of Stuttgart’s station.

The mediator had said that “no irreversible act” would be taken until more discussions took place. Official talks between the two sides are scheduled for the end of next week.

The Greens said Mappus was partly to blame for the confusion.

“One might think that Mappus wants to put an end to talks before they’ve even begun,” the Greens’ chief whip in federal parliament, Volker Beck, told daily Handelsblatt, adding that their denial of their appointed mediator’s comments was peculiar.

In recent weeks demonstrations against the project have intensified, coming to a head last Thursday when more than 100 protestors were injured as police turned water cannons, batons, and tear gas on the crowd to break up their blockade of the construction site.