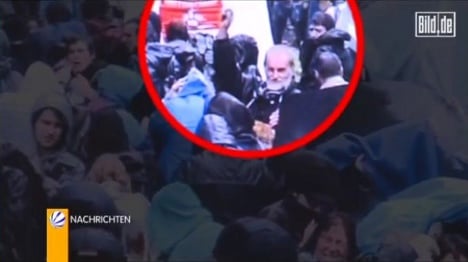 Photo: A screenshot from Bild.de

A widely circulated photograph of Dietrich Wagner being helped away from protests with bloodied and swollen eyes shocked Germany, turning the 66-year-old into a symbol of opposition against the controversial rail project known as Stuttgart 21.

Some demonstrators have accused police of going too far at the September 30 clash, when more than 100 people were injured. This week, protestors were photographed at demonstrations wearing fake blood around their eyes in his honour.

On Wednesday, Wagner, a retired engineer, told news magazine Stern that he had been trying to help some young people who were caught in the stream of water when he was blasted with the cannon directly in the face so forcefully he lost consciousness.

Doctors told the magazine that Wagner’s injuries are so severe that he may not regain his sight.

Demonstrators have said police reacted with disproportionate force to their blockade of the construction site in Baden-Württemberg state capital, a charge the authorities have denied.

But the new video, taken by police and broadcast by channel Sat. 1 on Wednesday evening, shows Wagner lobbing small, unidentified objects toward police officers during the demonstration.

The video also showed other demonstrators climbing onto and under police vehicles, setting off fireworks and scuffling with officers in a generally aggressive manner – with Wagner in the middle of it all.

Meanwhile the state parliament has begun an official investigation into what prompted police to turn water cannons, batons, tear gas and pepper spray on the demonstrators. State Interior Minister Heribert Rech has squarely blamed the protestors for the escalation.

The increasingly controversial construction in Stuttgart is part of a massive undertaking to make the city part of a 1,500-kilometre high-speed rail route across Europe.

It will require 16 new tunnels, 18 new bridges, 60 kilometres of new train track and three new stations. Stuttgart’s terminus will be transformed into an underground through-station – requiring a dramatic re-landscaping of the centre.