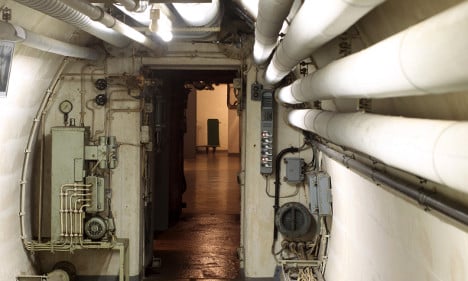 In the panic following East Germany’s construction of the Berlin Wall and the Cuban Missile Crisis in the 1960s, West Germany began “very intensive and very structured” preparations for a third World War, according to Jörg Diester, who has researched government bunkers for years.

“There was a real fear it would all start again,” he said.

Part of these preparations included the Bundesbank’s creation of an emergency currency, called BBk-Serie II, which would theoretically restore stability if hyperinflation occurred in the event of a crisis.

The bank then took it to the Rhineland-Palatinate community of Cochem, perched on a large hill along the left bank of the Mosel River. There, beneath a Bundesbank training and recreation centre, they built a 9,000-square-metre bunker and stored 15 billion replacement Deutsche Marks, the bank confirmed this week.

“One naturally speculated, that’s clear,” said Peter Peifer, who grew up in the area and now manages the property.

But the bunker’s true purpose and contents remained a secret until even just a few days ago, when local residents took the first tours of the bunker.

“There are pensioners who lose their sense of the world when they see it here,” 41-year-old Diester said.

The bunker was constructed to accommodate up to 175 people for two weeks in the event of nuclear war. In addition to its own electricity generator, it has air-filtration and sewage systems, and an enormous tank of potable water.

Delicate sensors also protected the money safe, sensitive enough to be set off by a train rumbling through a tunnel across the river, Diester said.

But even police who guarded the bunker never knew what it contained, only three internal personnel – a supervisor, cleaning woman and technician – knew the top secret information.

The key to the eight-tonne safe door deep inside the bunker was located at the Bundesbank in Frankfurt.

In 1988, still before the fall of the Berlin Wall, the money was removed and destroyed for reasons that remain unclear.

The Bundesbank continued to run its recreation centre there until 1994, when it was sold. Today the facility remains empty.

“There is the idea to make it part of touristic and educational concepts,” Diester said, hinting that it may become a museum.

On October 16 and 17 a group of 10 historians plan to conduct the first official tours of the bunker. They expect up to 1,000 visitors.