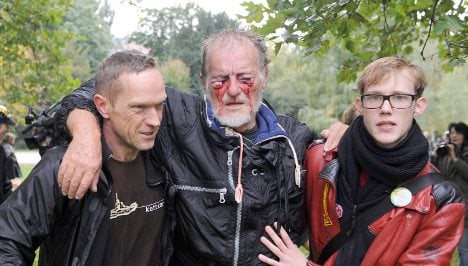 The picture of Wagner being helped away from the melee, his eyes swollen shut and bleeding, came to symbolise what critics claim was a heavy-handed approach by police trying to break up a demonstration against the controversial revamp of Stuttgart’s main train station.

Wagner’s doctor said the patient was currently blind and might never have his sight fully restored.

On Wednesday, news magazine Stern reported on its website that Wagner, a retired engineer had been trying to help some young people who were caught in the stream of water.

In an interview to be published on Thursday, Wagner told the magazine he had raised his arms and waved at police to indicate to them they should stop. But he was hit directly in the face with such force that he lost consciousness.

“It felt like the punch of a giant boxer,” Wagner said.

Wagner was part of a large crowd of protestors who blockaded the Baden-Württemberg capital’s Schlossgarten last Thursday in an effort to stop developers cutting down trees as part of the Stuttgart 21 rail project. In a dramatic escalation of tensions, at least 116 people were injured when police turned water cannons, pepper spray and batons on the crowd.

As well as suffering major bruising on both sides, Wagner’s eyelids were torn, and on one side, part of his orbital bone – which encases the eye – was fractured. The retina on the same side also suffered suspected damage.

The lenses of his eyes were damaged and will need to be replaced by artificial lenses.

Wagner was “at the moment blind,” the doctor told Stern. He could not say whether his patient’s sight would ever be fully restored.

Wagner has launched legal action against Baden-Württemberg’s Interior Ministry for causing bodily injury. He told the magazine he did not understand “how you can perpetrate such an inferno against the Stuttgart people.”