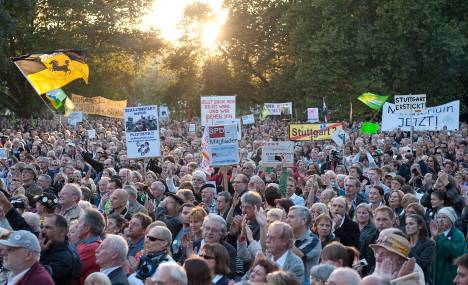 Crowds of protestors came out again on Monday evening in Stuttgart. Photo: DPA

“We will let it stand as is,” state Environment Minister Tanja Gönner told broadcaster ZDF. “And I believe that is a signal.”

But the minister rejected calls for a total suspension of construction on the site after protests in southwestern city turned ugly last week, with more than 100 people injured when police used water cannons, pepper spray and batons to break up the crowds blockading the work site.

The environmentalist Green party has since called for nationwide protest of the €7-billion project and demanded a halt to construction as a re-condition for negotiations with the growing number of opponents.

On Monday night tens of thousands of demonstrators gathered outside Stuttgart’s main train station once again. Police estimated that some 25,000 came out to voice their disapproval of the project, but organisers said they counted about 55,000.

But members of Chancellor Angela Merkel’s conservative Christian Democrats encouraged the protestors to open the way to reconciliation without imposing preconditions.

Agreeing to talks conducted by an independent mediator would provide the “chance to bring the discussion back to a practical level and begin constructive dialogue,” CDU state parliamentarian Joachim Pfeifer told daily Handelsblatt. But he added: “It’s clear there will be no stop to construction.”

The construction in Stuttgart is part of a massive undertaking to make the city part of a 1,500-kilometre high-speed rail route across Europe. It will require 16 new tunnels, 18 new bridges, 60 kilometres of new train track and three new stations. Stuttgart’s terminus will be transformed into an underground through-station – requiring a dramatic re-landscaping of the centre.