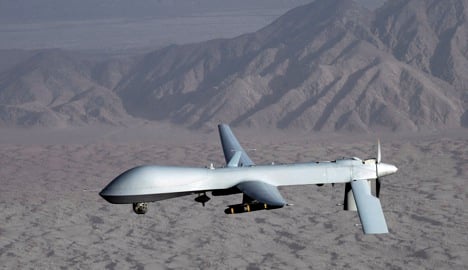 Two other security officials confirmed to AFP that five German nationals were killed in the strike.

North Waziristan is a reputed hideout for militants linked to the Taliban and al-Qaida, and is the operational epicentre of the latest plot reportedly uncovered by European and US intelligence agencies.

The attack came hours after Japan and Sweden joined Washington and London in issuing an alert warning of the “possible terrorist attack” by al-Qaida and affiliated groups against their citizens travelling in Europe.

US and German media said the information about possible targets was provided by a German national interrogated at Bagram Air Base in Afghanistan.

But German Interior Minister Thomas de Maiziere said on Monday there was no reason to change the country’s security threat level in response to US and UK travel alert warning of possible terrorist attacks in Europe.

“At the moment there are no indications of imminent attacks in Germany,” de Maiziere told reporters in Berlin. “There is however a high abstract threat, and German interests at home and abroad have been in the sights of international terrorism for some time.”

He said Berlin was taking all leads seriously and investigating them with high intensity.

Pakistani officials have reported that at least 21 US drone strikes in September killed around 120 people, the highest monthly toll for the attacks.

Recent missile strikes have largely targeted militants linked with the Haqqani extremist network, which is based in North Waziristan.

Officials in Washington say the strikes have killed a number of high-value targets including former Pakistani Taliban chief Baitullah Mehsud. However, the attacks fuel anti-American sentiment in the conservative Muslim country.

Militants fighting against over 150,000 US and NATO troops in Afghanistan are believed to be holed up in Pakistan’s northwestern Federally Administered Tribal Areas, as are operatives at war with Pakistani security forces.

Washington has branded the rugged tribal area, which lies outside Pakistani government control, a global headquarters of al-Qaida and the most dangerous place on Earth.

The US military does not as a rule confirm drone attacks, but its armed forces and the Central Intelligence Agency operating in Afghanistan are the only forces that deploy the pilotless drones in the region.

More than 1,150 people have been killed in over 139 drone strikes in Pakistan since August 2008, including a number of senior militants.

Under US pressure to crack down on Islamist havens along the Afghan border, Pakistan has in the past year stepped up military operations against largely homegrown militants in the area.

Last year Pakistan launched its most ambitious military offensive yet against Taliban militants in South Waziristan, expanding the campaign to many of the other seven semi-autonomous tribal districts along the border.

Pakistani commanders have not ruled out an offensive in North Waziristan, but argue that gains in South Waziristan and the northwestern district of Swat need to be consolidated to prevent their troops from being stretched too thin.

Pakistan has protested against the drone strikes but has never taken any practical steps to stop the US carrying out such attacks.

However, Pakistan’s move to block a main land route for NATO supplies last week indicates official anger at incursions into its airspace from US aircraft.

Pakistan halted the NATO convoys on Thursday after officials blamed a cross-border NATO helicopter attack for the deaths of three Pakistani soldiers.

While the key supply route remains closed, NATO supply convoys have come under attacks in Pakistan in the past three days. Pakistani Taliban militants claimed on Monday two fiery raids in which nearly 60 trucks were torched.