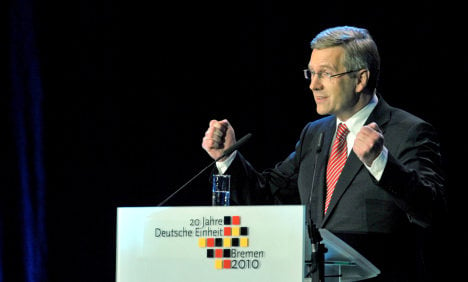 In his first major set-piece speech, Christian Wulff said: “We remember the momentous day that a people experience only rarely,” when the capitalist West and the communist East merged barely a year after the fall of the Berlin Wall.

“I bow before everyone who fought for freedom … your courage moved the world,” he told an audience of dignitaries including Chancellor Angela Merkel and European Union President Herman Van Rompuy, to generous applause.

But Wulff also highlighted the challenges ahead of the reunited Germany, focusing on the difficulties of integrating its large Muslim population, the subject of a fiery debate in recent weeks.

“Twenty years after reunification, we stand before the huge task of finding new solidarity in a Germany that is part of a swiftly changing world,” he said.

He demanded that those living in Germany adhere to the country’s constitution and its way of life, including learning the language.

For her part, Merkel, who was brought up in East Germany, recalled her life growing up under communism and said she would have been a “straightforward scientist” if the Berlin Wall had not fallen.

Merkel, 56, now considered the world’s most powerful woman, told Bild am Sonntag that despite the constraints of life in East Germany, “it is certainly true to say that it was not boring.”

“We read, we went for lovely journeys in eastern Europe … Life in East Germany was arduous, regimented and limited, but we tried to make something of it,” Merkel, who trained as a physicist, told the paper.

US President Barack Obama was quick to congratulate Germany, praising “the courage and conviction of the German people that brought down the Berlin Wall, ending decades of painful and artificial separation.”

Washington’s Cold War foe also congratulated Germany, with Russian President Dmitry Medvedev saying reunification carried an “enduring historic significance not only for the German people but for the whole of Europe.”

With the advent of the Cold War, Moscow erected a border between its eastern section and the three western Allied sections, including the Wall that split Berlin in two.

On October 3, 1990, just under a year after the Wall was yanked down in a bloodless revolution, the reunification treaty bringing the two halves of the country together came into effect amid joyful scenes.

Ever since, this date has been a public holiday to mark Germany’s national day.

In a recent poll, 84 percent of Germans said they believed national unification after four decades of division had been the right decision, despite a lingering economic gap between east and west.

While Germany has become a leading light on the international political stage and is Europe’s top economy, the country is still battling to overcome yawning gaps between the west and the east.

Unemployment remains nearly twice as high in the eastern states and living standards considerably lower, despite an estimated €1.3 trillion ($1.8 trillion) in transfers from west to east.

The celebrations took place under heavy security after around 1,800 mainly left-wing activists conducted a march in Bremen on Saturday evening.

Sunday also marked the quiet closing of a less happy chapter in Germany’s history, with the final repayment of around €70 million ($97 million) of interest on its World War I debt.