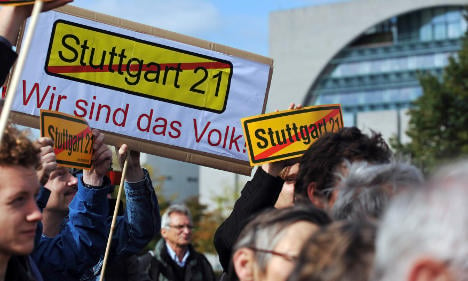 Demonstrators in front of the Chancellery in Berlin on Friday. Photo: DPA

“We Greens will demonstrate across the country to show our solidarity with the people of Stuttgart and make clear that we are with those who, against Stuttgart 21, stand for a different rail policy and want to assert their right to peaceful protest,” party co-leaders Claudia Roth and Cem Özdemir said in Berlin.

More than 100 people were reportedly injured in the southern city on Thursday as police turned water cannons and pepper spray on demonstrators, a choice Roth and Özdemir called unjustified and “brutal.”

According to the party leaders, the state’s government is attempting to discredit thousands of demonstrators who have been protesting against the controversial project peacefully for months through a strategy of “intimidation and criminalisation.”

The duo also criticised members of the conservative Christian Democrats, including Baden-Württemberg’s Interior Minister Heribert Rech and Chancellor Angela Merkel, for their defence of the police operations and alleged attempts to criminalise the protestors.

Meanwhile, the leader of the Greens’ parliamentary group, Renate Künast, promised that they would clarify every detail of the clash between demonstrators and police after the party failed to get parliament to address the issue on Friday morning.

The project has become increasingly unpopular among residents there, with protests growing larger and more intense as construction proceeds.