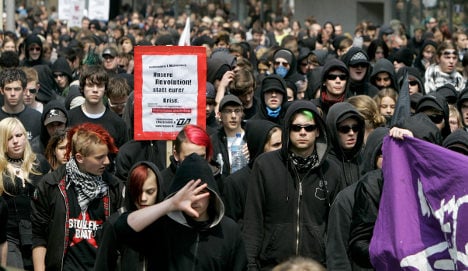 The president of Lower Saxony’s Office for the Protection of the Constitution, Hans-Werner Wargel, told the Neue Osnabrücker Zeitung that authorities had found blatant calls on leftist websites for arson attacks and sabotage.

“We are observing a strong mobilisation of violent, left-wing extremists in the lead-up to Unity Day celebrations,” he said.

Some threats were directed at organisers of the Unity Day celebrations, he said.

These celebrations will centre on the city of Bremen, with Chancellor Angela Merkel and President Christian Wulff among the high-profile guests.

“According to our information, the calls are especially attributable to the so-called ‘anti-German’ elements, which are within the far-left extremist scene.”

Statistics over the past year have shown a dramatic rise in violence committed by Autonomen – loosely-organised extremists who do not answer to any particular group or hierarchy.

These threats should be taken very seriously, Wargel said.

Unity Day on Sunday will celebrate 20 years since Germany formally reunified after decades of division into the communist East and democratic West during the Cold War.

There was, on the whole, a “new quality of readiness to commit violence” in the left-wing extremist scene, he said. He pointed by way of example to an 85-page handbook circulating in the scene, called “Prisma,” which amounted to a guide for violence.

“There hasn’t before been such an encyclopaedia for anarchist violence,” he said.

It contained expert instructions such as how a person “makes firebombs, prepares for criminal activity, avoids leaving evidence or counters police measures,” he said.

There might also be attacks on nuclear waste transport vehicles, he said.

“There is a series of indications that nuclear waste transport will be attacked this year by a large number of violence far-left extremists.”

This kind of activity was also dealt with in detail by “Prisma,” Wargel said.