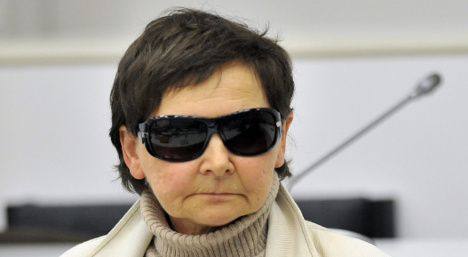 Becker, wearing large, black sunglasses, offered just a handful of words about her personal particulars to lead judge Hermann Wieland: that she was born in Berlin on July 31, 1952 and – after prompting – that she was single. She declined to give her current address.

“Ms Becker would like at this time to provide neither personal details nor details about the issue,” her lawyer Walter Venedey said.

Becker, 58, looked calm as she appeared in court near Stuttgart in a cream jacket and with her black hair cut short.

Prosecutor Siegfried Buback was killed along with two others when a motorcycle pillion-rider sprayed his chauffeur-driven limousine with bullets on April 7, 1977, in the southwestern city of Karlsruhe.

Other members of the murderous “anti-imperialist” outfit – also known as the Red Army Faction – have been convicted for the killing, but the person with the gun has never been identified.

Buback’s son is “99 percent” sure that Becker killed his father, but she is accused only of helping in the planning, not pulling the trigger.

“We just want to know who is guilty. We just want the truth,” Michael Buback, a co-plaintiff in the trial, told reporters.

Becker’s involvement was never proved and the case was closed in 1980. According to press reports, she has denied involvement and even told investigators another militant, Stefan Wisniewski, fired the shots.

The case was reopened in 2008 when her DNA was found on a letter from the gang claiming responsibility for Buback’s death.

The unmarried, childless Becker was charged in April with conspiracy to murder, but has continued to live freely in Berlin with her sister.

The killing was one of several operations carried out by the gang, better known to Germans as the Red Army Faction (RAF), during the peak of its armed campaign against West Germany in the 1970s known as the “German Autumn.”

“The assassination of Siegfried Buback marked the start of the ’77 offensive,” prosecutor Walter Hemberger told the court as he read the charges on Thursday.

The urban guerrillas took up arms against what they considered an oppressive capitalist state still riddled with former Nazis, killing 34 people in attacks on West Germany’s elite and US military bases before disbanding in 1998.

Soon afterwards German commandos stormed a Lufthansa jet on the tarmac at Mogadishu airport that had been hijacked by Palestinians who were allied to the gang. The same day, the gang’s jailed “first generation” of leaders, Andreas Baader, Gudrun Ensslin and Jan-Carl Raspe, were found dead in their cells.

The official story is that they committed suicide but conspiracy theorists maintain they were murdered.

“In November 1977 I didn’t have much trust in the stability of the nation,” West Germany’s chancellor at the time, Helmut Schmidt, admitted in a 2008 newspaper interview.

Germany is now a peaceful country, marking this weekend 20 years since the reunification of West and East Germany. But Verena Becker represents a loose end from that traumatic era. She was sentenced to life in 1977 for other Baader-Meinhof activities, but freed in 1989. She trained as a physiotherapist but took early retirement after becoming ill.

Becker is being tried in the same place that she was convicted in 1977, not far from the prison where her former comrades-in-arms died.

If convicted, Becker in theory faces a life sentence, but in view of the time already served behind bars she would likely receive substantially less. A verdict is not expected before late December.