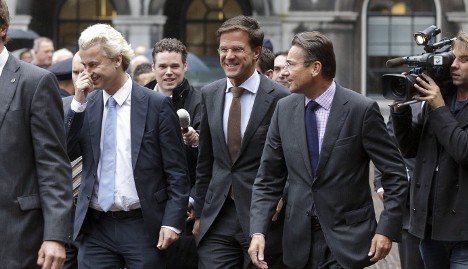 Liberals and Christian Democrats in the Netherlands are working towards a deal with Wilders’ anti-immigration Freedom Party (PVV) in a bid to form a minority government after a June election failed to yield a clear winner.

Under the proposed deal, the Freedom Party would be ”tolerated,” Dutch media have reported.

Wilders’ PVV won record support in the June election, giving it the third highest vote and an unprecedented bargaining position.

However the final decision on a deal rests with a party congress of the Christian Democrats (CDA) to be held on Saturday. While the party’s leader Maxime Verhagen backs the deal, dissident CDA MPs are forcing him to put it to a full vote at the party congress.

The German Christian Democrats (CDU), who have long had a close connection with their Dutch counterparts, have expressed concern about Wilders.

“Leaving aside the difficulty of establishing a government in the Netherlands, Mr. Wilders and his party are antagonists to Christian Democrat policies,” Ruprecht Polenz, chairman of the foreign policy committee of the Bundestag, told Der Spiegel. ”With his Islamophobia and his populism, he divides the community rather than uniting it.”

Michael Link of the pro-business Free Democrats said: “Tolerance of Wilders would be a difficult tightrope walk.”

But he added that Mark Rutte, leader of the Dutch liberals, People’s Party for Freedom and Democracy, had a “cosmopolitan and tolerant compass” that would “in no way give in to (Wilders’) xenophobic demands.”

Rutte, as leader of the party that scored the highest vote in the June election, would become Prime Minister.