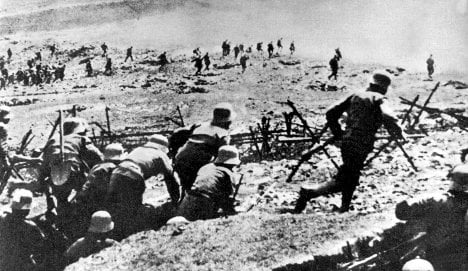 Germany is to pay €69.9 million this Sunday – which coincides with the 20th anniversary of German reunification – as a final payment on the massive debt it owed to the Allied countries after the war ended in 1918.

The payment, which covers interest on bonds issued by the German government, will bring to an end the country’s financial obligations covering the destruction wrought by WWI, the Federal Office for Central Services and Unresolved Property Issues told news magazine news magazine Der Spiegel on Tuesday.

Under the 1919 Treaty of Versailles, the victorious allies ordered Germany to pay 132 billion Reichsmarks – a little under €300 billion in today’s money – a sum that crippled the already battered nation. Anger among Germans over the size of the reparations payments and the allies’ insistence that Germany take sole responsibility for the First World War helped pave the way for the Nazis’ rise to power.

Germany stopped making the payments in 1931 to cope with the Global Depression and when Adolf Hitler’s Nazis came to power in 1933, they refused to resume the payments.

Ursula Rombeck-Jaschinski, a historian who has written a book on the London Agreement, told The Local that this last payment was “in principle … the end of World War I.”

“The London debt settlement (of 1953) was an absolute milestone. It was the key to getting back into the western world because Germany showed that she is a reliable debtor – and paying her debts was the basis for the future.

“So in principle it is the end of World War I, now that these funding bonds are fully paid.”

Whether it would make the average German feel any different was another matter, however.

“I don’t think many people actually knew about it,” she said.

Sunday’s sum is the final payment on interest accrued between 1945 and 1952 on foreign bonds the German government had issued between the two world wars to raise capital for Treaty of Versailles payments.

The money Germany pays on Sunday will therefore actually go to private investors who own these bonds.

The actual reparations payments themselves were finished in 1983. Under the London Agreement on German External Debts, signed by then Chancellor Konrad Adenauer in 1953, Germany was excused from paying off the €125 million in interest on the bonds until after the country was reunified.

This last payment will come exactly 20 years after East and West Germany were formally reunited following the fall of the Berlin Wall and the end of the Cold War.