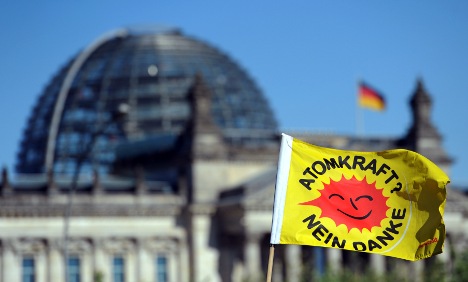 A nuclear energy protest flag flies in front of the Reichstag. Photo: DPA

The cabinet agreed today to an extension of an average 12 years to Germany’s reactors over fierce resistance from opposition parties and environmentalists.

The battleground now moves to the courtroom with opponents set to lodge complaints to the Constitutional Court because the government has side-stepped the upper house of parliament, or Bundesrat, where it does not have a majority.

Greenpeace activists, meanwhile, are holding demonstrations against the decision at nuclear facilities around the country.

Under the plan, the seven reactors that began operating before 1980 will be extended by eight years, and the 10 newer reactors will continue for 14 years.

That means the last reactor will not be decommissioned until at least 2036.

Nuclear power could remain part of Germany’s energy mix for even longer: if a reactor needs to be closed down prematurely, its running time can be transferred to another, younger reactor.

The government has sold the extension as a bridge while renewable energy technology is further developed, with the goal to make renewables the dominant power source by 2050.

But details of the goals on renewable energy remain vague and a plan for mandatory green-friendly renovations to buildings has been ditched. Chancellor Angela Merkel has hailed the plan as a sound, long-term energy policy.

Under a previous coalition government, the centre-left Social Democrats and environmentalist Greens agreed to phase out nuclear reactors by 2022 – a decision that Merkel has now reversed.

The centre-right coalition of Merkel’s Christian Democratic Union (CDU) and the pro-business Free Democrats (FDP) say the extension is needed to keep electricity prices stable and allow time for a gradual changeover to renewable energy.

There is now some dispute about whether the Bundesrat must approve the nuclear extension. Merkel’s coalition lost its majority in the upper house earlier this year, meaning she could not get such a controversial law through.

The opposition parties have announced they will take the matter to the Constitutional Court in Karlsruhe.

Greens parliamentary leader Jürgen Trittin told broadcaster SWR that it was “a bad day” for Germany when the nuclear industry could thwart the renewable energy industry.

At all 12 nuclear power plant sites around Germany, Greenpeace activists have been protesting since early Tuesday morning with the slogan, “Nuclear power is hurting Germany.”

“The danger of radioactive contamination because of a serious reactor accident has not been averted,” said spokesman Tobias Münchmeyer. “There is ever more radioactive waste produced, for which there is no storage place.”

Meanwhile experts have voiced repeated concerns over the safety of the country’s ageing nuclear power plants.