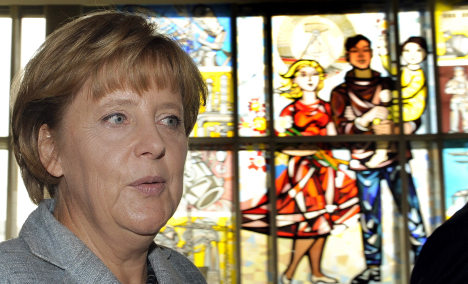 The 56-year-old German leader told Superillu magazine that she tended to overstock her cupboards “because you used to just get what you could in an economy where things were scarce.”

“Sometimes I just buy things because I see them even though I don’t really need them at the time,” she told the magazine which was founded in East Berlin during the communist era and which specialises in issues facing eastern Germany.

Merkel, who lives in private apartment with her quantum chemist husband in Berlin’s city centre, said she also still has a hankering for typical foods in the German Democratic Republic, as the repressive state was known.

Soljanka, a meat and pickled vegetable soup, schaschlik (kebabs) and lecso, a thick Hungarian vegetable stew, are a few of the eastern delicacies Merkel said she still savours.

Merkel said it took her several years to adopt western terms in her vocabulary, long opting to shop at a Kaufhalle, or “shopping hall,” as such stores were known in the east.

“But it occurred to me that since the 15th or 16th year of German unity, the word ‘supermarket’ has passed my lips more easily,” she said.

Germany on Sunday will celebrate the 20th anniversary of the unification of east and west after 40 years of division, prompted by the fall of the Berlin Wall in a peaceful revolution in November 1989.

East Germany’s planned economy was marked by chronic shortages of consumer goods, just one factor feeding its citizens’ dissatisfaction with the “Farmers’ and Workers’ State,” as the communist leaders called the country.