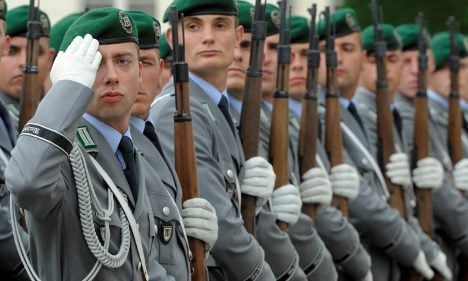 In doing so, they have accepted Defence Minister Karl-Theodor zu Guttenberg’s argument that an end to compulsory military service is an essential part of overhauling the creaking military.

However, the overall size of the armed forces will not drop as sharply as Guttenberg had previously suggested.

Guttenberg’s reforms aim to slash spending while making the armed forces leaner and better able to tackle the sorts of expeditionary missions expected in the future, such as counter-terrorism and peace-keeping.

Some details were still to be decided, including the actual size of the Bundeswehr, Gröhe told broadcaster Deutschlandfunk. Guttenberg has previously flagged a reduction in personnel from the present 250,000 to as few as 163,500.

Government sources told newsagency DAPD that overall troop numbers would lie “clearly” above Guttenberg’s lower limit, with a figure of 180,000 being discussed. Many in the CDU and particularly in their sister party the CSU – to which Guttenberg himself belongs – believed more soldiers were needed.

Indeed, the CSU has been the main opponent to Guttenberg’s push for reforms, saying it is an important duty that keeps civil society in touch with the military.

The decisions still need to be approved by the CSU’s party conference at the end of October and the CDU’s conference in mid-November.

Christian Schmidt, parliamentary defence expert for the CDU and CSU, described the 163,500 personnel previously floated as “below the limit” of what the Bundeswehr needed to carry out its role.

Strictly speaking, conscription is being suspended rather than abolished, he said, explaining that provisions for military service would remain in the constitution.

Schmidt also downplayed concerns about mass closures of military bases – addressing a concern that many smaller bases will disappear, harming local communities that rely on them economically.

“We don’t want to create mega-bases,” he told broadcaster Bayerischer Rundfunk. “The Bundeswehr will remain in the community.”

That was also important for attracting new recruits, he said.

The pro-business Free Democrats, the junior members of the centre-right coalition, welcomed the decision by the conservative leaders.

As part of the government’s drastic budget cuts to balance the budget in the wake of bailout and stimulus packages, Guttenberg has to slash €8 billion from his ministry’s budget by 2014. He is using the cuts as an opportunity to modernise the military to make it better suited as an expeditionary force for foreign missions, rather than one primarily geared for territorial defence, which is widely seen as a Cold War-era hangover.