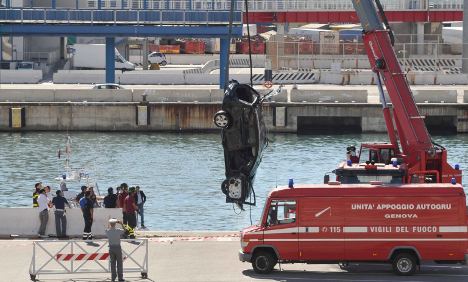 Rescuers fish the vehicle out of the harbour on Sunday. Photo: DPA

Witnesses cited in the Italian media said that the tourists’ car, the third off the ferry, was on the ramp in reverse gear when the ferry moved forward, causing the car to plunge into sea.

Rescue workers were unable to get to the couple in time to save them.

Moby Line, which owns the ferry, said it could not exclude “human error” in the tragedy. The ferry had just arrived from the Mediterranean island of Sardinia, port officials said.