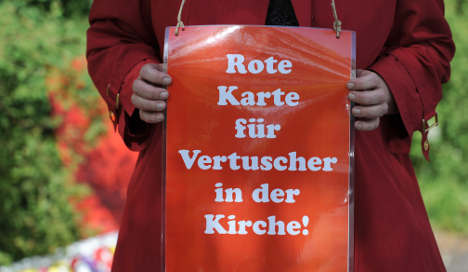 German bishops will bring this suggestion to the round-table talks on child sexual abuse set to start on Thursday, according to a report in Der Spiegel on Saturday.

A spokesman for the Bishop’s Conference said the compensation should be “appropriate to the severity of the act, and helpful to the victims.”

Similar cases which have been decided by German courts have resulted in compensation payments of between €5,000 and €10,000 – well short of the €82,373 general payment per head called for by victims’ representatives.

Costs for therapy and other necessary help would also largely be paid for by the Church though, said the bishops.

Even if the first payments were to be made this year, Christine Bergmann, the government-appointed independent commissioner for the matter, said the Church was being slow in acting.

“Those concerned want the perpetrators or the institutions take on responsibility,” she said.

“Most of those who contact us want financial compensation because they have often been unable to establish themselves professionally due to the abuse – or have been financially burdened by sometimes very lengthy therapy.”

Matthias Katsch, spokesman for the victims, said he wanted to see no bureaucratic acknowledgement process – and insisted that payments should not come with the condition of a victim agreeing not to sue.