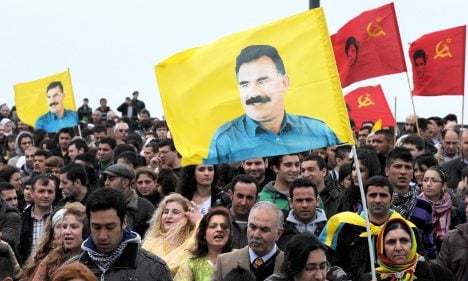 Kurds show their support for the PKK in Düsseldorf. Photo: DPA

“We discussed… the fight against terrorism… I gave him a dossier on the information we have,” Atalay told a joint press conference with his German counterpart Thomas de Maizière.

Turkey has long accused European Union countries of tolerating the activities of the outlawed Kurdistan Workers’ Party (PKK), an armed group waging a 26-year campaign for Kurdish self-rule in southeast Turkey that is blacklisted as a terrorist organization by the 27-nation bloc.

Ankara says the group has an extensive support base among Kurdish migrants in Europe who run non-governmental organizations sympathetic to the rebel campaign.

It also argues that the PKK obtains much of its finances through drug trafficking, people smuggling, extortion and money laundering in Europe.

De Maizière, on a two-day visit to Turkey, said his ministry would act upon the information handed by Turkey if need be.

“Our intelligence agencies will compare their own information with that given to us. We will see if there is new information and, if necessary, take action,” he said.

He also added that Turkey and Germany had decided to establish a political committee for the “better coordination” of efforts in the fight against terrorism, be it PKK or the extremist al-Qaeda network.

The PKK was banned in Germany in 1993 in the wake of a spate of attacks against Turkish and German interests in the country.

Germany is home to a community of some 2.4 million Turkish immigrants, many

of them ethnic Kurds.

The PKK picked up arms against Ankara in 1984 for autonomy in the country’s Kurdish-populated east and southeast, sparking a conflict that has claimed some 45,000 lives.