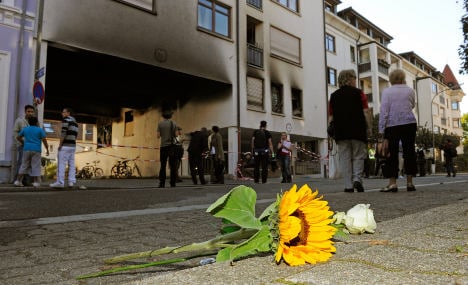 The 41-year-old lawyer Sabine R. had amassed about 50 litres of Nitrocellulose lacquer, between 10 and 20 litres of gasoline and several litres of ethyl alcohol. The three substances make up an explosive combination, and were used to blow up an apartment on September 19 after she killed her ex-partner and their five-year-old son.

On Tuesday autopsies revealed that she had first knocked her son unconscious and then smothered him with a plastic bag, and that the father of her child had died of two bullet wounds to the head and neck.

After leaving the apartment, Sabine R., a recreational markswoman, went to the neighbouring St Elizabeth Hospital with a legally owned 22-calibre sports pistol and a knife, shooting at a few passersby on the way, before killing an orderly in the gynaecological ward and injuring a police officer before she was shot dead by other officers.

Earlier in the week media reports said that the woman had a miscarriage at the hospital in 2004, but on Friday investigators in the southwestern city said that she had also been turned down for a job in the hospital administration in 2006.

The motive for her deadly rampage seems to have been personal frustration, investigators said.

“According to the information available, the woman had a hard time with the separation from her husband and child,” a statement from the public prosecutor’s office said. “She also had difficulties finding her feet professionally.“

Her husband had left her for a new girlfriend in June, the statement added.

Sabine R. had also sought psychotherapy following several miscarriages, but did not stay in treatment long-term – something her husband had encouraged, investigators said.

She had also planned to take a course on hunting, and had stored three of her four weapons with a local hunter. She used the fourth weapon during her deadly rampage.

The 56-year-old hospital orderly, who Sabine R. shot three times in the head and stabbed several times in the upper body, was buried on Friday. With his death, he likely prevented the slaughter of several others, prosecutors said in a statement.

The woman had more than 300 rounds of ammunition on hand, but he managed to stall her for a “lengthy period of time” until the first police officer arrived on the scene.

Both Protestant and Catholic churches in Lörrach have memorial services planned for the victims of the rampage on Saturday.