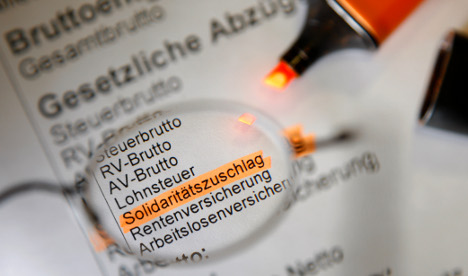 German taxpayers must continue paying the so-called Soli, calculated at 5.5 percent of their income tax, the Constitutional Court in Karlsruhe ruled.

A November 2009 ruling by a lower court in the state of Lower Saxony had argued that the surcharge was incompatible with basic constitutional law if kept in place long term, but the high court found this argument to be insufficient.

Instituted in 1995, Germans have continued to pay the Soli – even though the revenue it gathers is no longer specifically tied to rebuilding eastern Germany.

The court, however, did not address the “character” of the tax, but rather ruled that there need not be a set time limit for its levying, referring to a previous case that ruled supplementary taxes needn’t necessarily be temporary.

Volker Wissing, the parliamentary finance policy spokesman of the pro-business Free Democrats, said the court had not given a definitive decision on the tax’s future, but had merely provided politicians instead with a bit of “breathing space.”

Meanwhile the BdSt taxpayers association said it was satisfied with the decision, even if it didn’t set a date for the end of the tax.

“We’re not all that unhappy, because now there is clarity in the matter,” association director Reiner Holznagel told daily Leipziger Volkszeitung.

“The Soli political critics can no longer hide behind a decision from (the court in) Karlsruhe and must instead show how the Soli can be abolished as soon as possible,” he added.