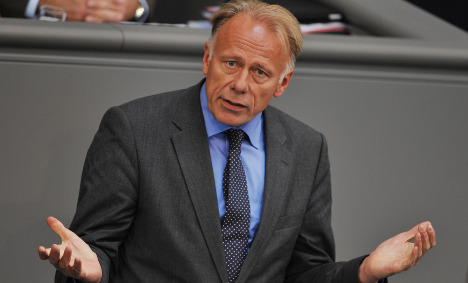 The attacker, dressed in white, was able to flee after hitting the politician with a pie-like object full of light-coloured paint or yoghurt, a police spokesperson said on Thursday.

Trittin, a former environment minister, was taking part in a theatre project called Republik Freies Wendland when the attack occurred around 7:20 pm.

After the attack, Trittin’s discussion partner, anti-nuclear activist Hanna Poddig refused to distance herself from the attack, saying she thought it was “good.”

Following this declaration Trittin broke off the talk.

“Physical violence is no basis for a discussion and I can’t have a conversation with someone who finds violence against me good,” he said before leaving.

A spokeswoman for event organiser Schauspiel Hannover condemned the attack, calling it “unacceptable,” and denying that cake attacker could have been part of the project, which is part of a 10-day remembrance of the 1980 Freie Republik Wendland protest action against the Gorleben nuclear storage site.

Hannover police are searching for a person between 17 and 25-years-old on suspicion of attempted bodily harm.