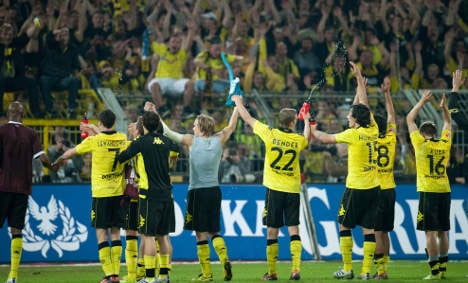 Dortmund are three points behind leaders Mainz after a comprehensive win which saw them 2-0 ahead at half-time thanks to goals from Lucas Barrios and Kevin Großkreutz.

Defender Mats Hummels scored with a header on 65 minutes before Poland striker Robert Lewandowski hit the fourth on 75 minutes and Barrios scored his second in the game’s final moments.

“If someone had told me at the start of the season we would have 12 points at this stage in the season, I would have taken that,” said Klopp. “These wins have come on the back of hard work, but now we have to worry about a tough trip to St Pauli on Saturday.”

“This win is a relief for us,” said Schalke coach Felix Magath. “We were under a lot of pressure. I am very happy with the team, even if we are still playing with some uncertainty.”

Despite the three points, Schalke remain rooted to the bottom of the table, but will have the chance to move up from 18th place when they host Mönchengladbach – who are 15th – on Saturday.

Schalke took the lead for the first time this season when midfielder Ivan Rakitic fired home on nine minutes before Freiburg equalised when Papiss Demba Cisse scored his fifth goal of the season on 69 minutes.

Freiburg midfielder Ivica Banovic was sent off right at the end, 11 minutes after he came on as a substitute.

Wolfsburg striker Edin Dzeko also hit his fifth goal of the season when he scored the Wolves first goal in the 3-1 draw at Hamburg before Brazil forward Grafite scored two late goals to seal the win.

Nuremberg got their first win of the season when they beat Stuttgart 2-1 while St Pauli beat Mönchengladbach 2-1.

Leverkusen brushed off their injury problems with a 2-1 win over Eintracht Frankfurt and welcomed back Simon Rolfes although both striker Stefan Kiessling and midfielder Michael Ballack are currently injured.

On Tuesday, Mainz 05 beat Cologne 2-0 to stay top, while Bayern Munich have lost winger Franck Ribery for the next month after he injured his right ankle in the 2-1 win at Hoffenheim.

Champions League side Werder Bremen slumped to their second consecutive league defeat when they were beaten 4-1 at Hannover.