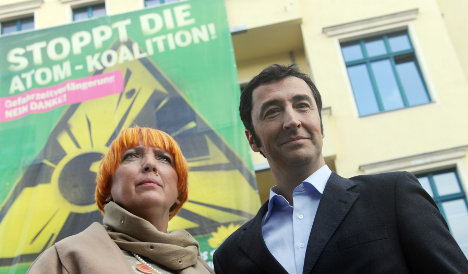 One year after the federal election of September 2009, the mood of the electorate has changed dramatically, with the Greens in particular soaring to an impressive performance, partly on the back of voter anger over the centre-right government’s recent decision to extend the life of the country’s nuclear reactors.

The Greens’ parliamentary leader Jürgen Trittin, apparently speaking before the poll result was published, told Wednesday’s edition of the Rheinische Post that the SPD was no longer the main opposition to Merkel’s CDU. He had noticed “with interest” that Merkel had regarded the Greens as her chief antagonists on issues ranging from the nuclear extension to the controversial Stuttgart 21 redevelopment.

“We’re happy to take on this challenge,” he said.

The SPD and Greens are now neck-and-neck on 24 percent each, giving them enough combined support to unseat the government were an election held this weekend. The ruling coalition of Merkel’s CDU and the pro-business FDP are languishing on a dismal combined support of 34 percent.

The Greens’ stunning result is a record high for the party, led jointly by Cem Özdemir – the first German of Turkish descent to lead a major party – and Claudia Roth. It gained 2 percentage points on the previous week’s result. At the last election, it scored just 10.7 percent support.

The SPD’s figure of 24 percent was unchanged on the previous week. It gained 23 percent of the popular vote last September.

The socialist Left party registered support this week of 10 percent – a point less than it scored last September.

By far the biggest losers in the shake-up are the FDP. Having seen their support steadily drain away over the past 12 months, the party led by Guido Westerwelle has now lost fully two thirds of its support since the election, dropping from 14.8 percent a year ago to 5 percent today.

Merkel’s CDU, meanwhile, won the approval of 29 percent of voters this week – one point fewer than last week. The party has hovered steadily around 5 points below the 33.8 percent it won last year to secure government.

Forsa polling firm boss Manfred Güllner, who conducted the survey, told Stern magazine that SPD leader Sigmar Gabriel, who has taken a strong stance against the nuclear extension, would be better off leaving the issue to the Greens and focusing on the broad concerns of his party’s supporters, such as jobs, pensions, education, poverty and immigration.

The poll of 2501 representative likely voters was taken between September 13 and 17.