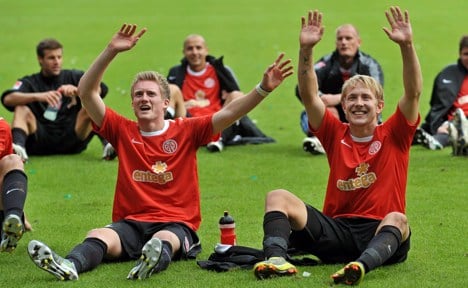 Fresh from their 2-2 mid-week draw with Tottenham in the Champions League, Bremen were stunned at home as midfielder Marcel Risse netted and teenage striker Andre Schürrle scored his third goal in three games.

from their first four games.

“That was nothing like what you expect from Werder Bremen,” fumed coach Thomas Schaaf, whose side face Hanover on Tuesday in their next match. “It is perhaps for the best that we now have to play again on Tuesday in Hanover.”

Mainz coach Thomas Tuchel said his side showed plenty of self-belief to get a win at Bremen.

“We wanted to defend aggressively and not let Werder come into the game, which we managed very well,” said Tuchel. “We were very attentive throughout the entire game and stayed focused.”

“The leadership in the team has also given us courage to believe we could win in Bremen,” he said.

Defending champions Bayern remain in mid-table after they were held by Cologne at Munich’s Allianz Arena.

The game coincided with the start of Oktoberfest in the Bavarian city, but there was little for Bayern fans to celebrate.

Cologne had several chances to win as Bayern goalkeeper Hans-Jörg Butt had a busy afternoon, while Munich only threatened in the game’s closing stages. The result leaves Bayern eighth with five points from four games.

“I am not disappointed with our game,” said Bayern coach Louis van Gaal. “We got in the penalty area on several occasions, but it is always difficult when the opposition put so many players behind the ball.

“We found it hard to score. In those situations you need to have a bit of luck, which we don’t seem to have at the moment. If we continue on this path, then I am sure we will take our chances soon. It is only a matter of time.”

Hoffenheim lost their 100 percent record and are now second after they were held to a 2-2 draw by Kaiserslautern.

Making only his second appearanace for Hoffenheim, Iceland midfielder Gylfi Sigurdsson came off the bench on 77 minutes and blasted home a free-kick to rescue a point for his team.

Christian Gross-coached Stuttgart got off to a flying start when Pogrebnyak scored after just two minutes and he scored his third goal on the hour mark as the hosts ran riot to claim their first points of the season.

Ex-England coach Steve McClaren picked up his first points in charge of Wolfsburg as Brazilian playmaker Diego and Bosnian striker Edin Dzeko both netted in a 2-0 win over Hanover.

Diego struck first with a superb bicycle kick on 55 minutes, while Dzeko showed his power and pace with a 67th-minute shot that gave Hanover goalkeeper Florian Fromlowitz no chance.

There are two key derbies on Sunday, when Hamburg are at St Pauli in the Hamburg city derby and Dortmund are at Schalke in the Ruhr valley clash.