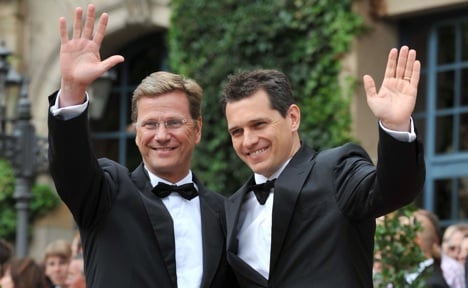 “The marriage was pronounced by the mayor of Bonn, Jurgen Nimptsch. Only close family were present, some 20 people”, the newspaper said, without quoting other sources.

In Germany, gay marriage is not recognised by the state, but since 2001 “registered partnerships” for same-sex couples are allowed, which provide some but not all the rights of marriage.

According to news magazine Der Spiegel, a spokesman from the liberal Free Democratic Party, which Westerwelle leads, confirmed the report, but would not give any further details.” Michael Mronz and Guido Westerwelle see this as a private matter,” the spokesman said.

Westerwelle, 48, and his 43-year old partner Mronz, who organises sports events, met in 2003 and have been a couple ever since.

The foreign minister “came out” in 2004, during a dinner to celebrate German Chancellor Angela Merkel’s 50th birthday.

Since then, Mronz has accompanied him on a number of official trips, namely in Asia and Latin America, provoking a flurry of media debates over a possible conflict of interests between Westerwelle’s private and professional life.