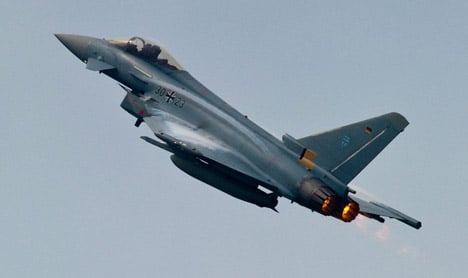 The spokesman said the sophisticated aircraft were grounded from Wednesday evening as a precautionary measure “because in certain circumstances the ejector seat does not operate faultlessly in case of emergency.”

The problem had been detected during a check and was being taken up with the manufacturers, he added.

A lieutenant-colonel of the Saudi air force was killed during a training flight in August with a Spanish instructor when their Eurofighter Typhoon crashed for an unknown reason.

The instructor managed to eject and was only slightly hurt, the Spanish Defence Ministry said at the time.

Saudi Arabia, which took delivery last year of the first of the 72 Typhoons it plans to buy, has its pilots trained to fly the aircraft by the Spanish air force under a bilateral agreement with Madrid.

The Typhoon, a multi-purpose twin-engine fighter jet introduced in 2003, is built by a consortium made up of the European Aeronautic Defence and Space Company (EADS), Britain’s BAE Systems and Alenia/Finmeccanica of Italy. It also serves with the British and Italian air forces.