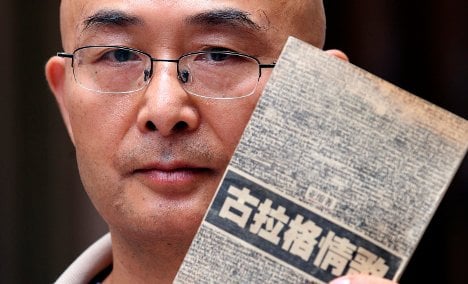 “I’m a stupid farmer, obstinate as a mule,” he told a press conference here, adding that if he had not succeeded on his fifteenth attempt to obtain permission to leave the country, he would have insisted a sixteenth time.

“I would have kept on trying,” he said after flying to Berlin on Wednesday as a guest of the Berlin International Literature Festival (ILB). “It’s like a dream being here,” he added.

But he said he intends to return to work in China in about six weeks’ time. “I want to go back to China. I want to work in my home country as a writer,” he added. His books remain banned in China.

Last year the author, also known as Lao Wei, was prevented from attending the Frankfurt Book Fair, the world’s largest, and in March this year was banned from travelling to another German festival in Cologne.

In February, Liao, who has served time in prison, appealed to German Chancellor Angela Merkel for help in a letter posted on the Human Rights in China group’s website, according to advocates.

The author did not address the matter on Thursday, and ILB chairman Ulrich Schreiber said he could only hope the lifting of the travel ban signified a relaxing of rules by Chinese authorities.

Liao, who has been arrested several times for criticizing the Chinese regime, including over the 1989 killing of pro-democracy demonstrators in Tiananmen Square, said his books remained banned because he insisted on speaking out.

“It’s important that an author not censor himself. That he speak his mind. Unfortunately there is too much self-censorship in China as authors consider whether they want to be published or not,” he added.

“But I’m sure many people in China read underground copies of my books,” he added, speaking also of the power of the Internet and the micro-blogging website Twitter.

Liao, who intends to travel around Germany, also hopes to attend this year’s Frankfurt Book Fair to give a reading of his works.