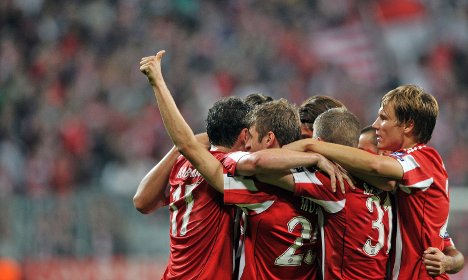 The Group E match was heading for a 0-0 draw until Müller, the top scorer at the World Cup, lit up a dull night in Munich by curling his shot around Roma goalkeeper Julio Sergio on 79 minutes.

“In the first-half, it was very difficult for us, because Roma stood deep,” admitted Müller. “But we moved the ball around really well and then Roma started to tire.”

After a drab opening hour, Bayern raised the tempo noticeably in the closing stages and second-half substitute Klose showed his experience by latching onto defender Holger Badstuber’s long free-kick for the second on 83 minutes.

“They just defended, which always makes it hard. After 70 minutes, Rome couldn’t run any more. The fans must understand that we need time to break them down. We created two fine goals and could have scored more, so that is fantastic.”

Roma coach Claudio Ranieri said he was happy with his side’s effort, but not the result.

reflection, because we also had many chances.”

Van Gaal opted to drop Klose to the bench for his starting side and played Ivica Olic as the lone striker in front of an attacking midfield including Germany’s rising stars Toni Kroos and Müller.

French midfielder Franck Ribery served out the last game of his three-match ban, having been sent off in last season’s semi-final against Lyon.

Roma coach Claudio Ranieri had plenty of experience in his side, led by former Azzurri World Cup winners striker Francesco Totti with Daniele de Rossi in midfield, but they barely tested Bayern’s goal all night.

Roma’s best chance of the opening period fell when left-back Marco Cassetti managed to get the better of Germany defender Philipp Lahm and drove his shot across the face of Bayern goalkeeper Hans-Jörg Butt.

Both Lahm and Klose have commented that Bayern are still flat as their star-studded squad work their way back to full fitness after the rigours of the World Cup and that showed in the first half, with the hosts lacking sparkle.

Kroos threatened the Roma goal after 54 minutes when he fired his shot just over both goalkeeper Julio Sergio and the crossbar.

Less than a minute later Mueller had a great chance directly in front of goal, but could not connect as Bayern turned up the pressure, with midfielders Bastian Schweinsteiger, Hamit Altintop and Kroos all having chances saved.

With just over 20 minutes left, Bayern coach van Gaal brought on Germany forwards Klose and Mario Gomez for Altintop and Olic, with immediate results. Klose clipped the far post just before Mueller’s superb opening goal and then got himself into the perfect spot to simply tap in Bayern’s second.

In the next round of matches on September 28, Bayern are at Basel while Roma host Romanian side CFR Cluj.