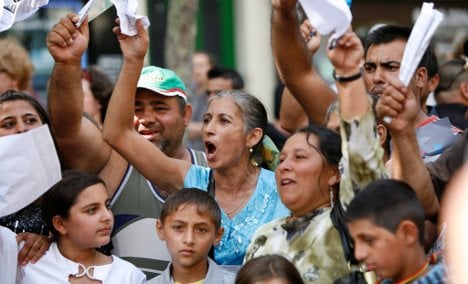 “Freedom of movement within the EU applies without conditions, ethnic minorities should not be discriminated against … and basic rights apply,” government spokesman Steffen Seibert told a regular briefing.

“Of course such statements are sometimes more useful when they are made using a more measured tone.”

German government officials said meanwhile that Berlin saw the controversy as a bilateral issue between France and the Commission and that the expulsions were not on the agenda for discussion at an EU summit starting Thursday.

France has been under fire for weeks over President Nicolas Sarkozy’s drive to deport Roma, previously called Gypsies, living in travelling communities in France back to Romania and Bulgaria, and Paris now faces the threat of European legal action.

On Tuesday, Reding sparked consternation in Paris after comparing the expulsions with the fate of millions of Roma and Jews in German-occupied Europe in World War II.

Germany’s Süddeutsche Zeitung daily reacted furiously, saying in an editorial that Reding should either apologise or resign “before she causes serious damage to relations between Brussels and Paris.”

“One would have hoped that the commissioner responsible for justice in the EU would know the difference between the extermination of ethnic minorities in World War II and deporting unwanted guests and giving them a few hundred euros,” the paper said.

“If she had stopped to reflect a little bit she might even perhaps have also realised that Europe’s post-war history has not been free of persecuting minorities either.”