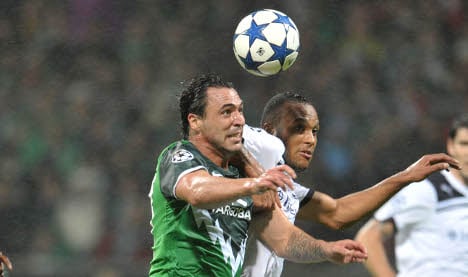 But Bremen rallied and two goals in four minutes either side of half-time levelled the scores.

Spurs also lost van der Vaart with a calf strain just after the break, but manager Harry Redknapp later said the injury was not serious.

“I thought we were fantastic for the first 43 minutes, then we conceded a goal just before half-time which gave them a lifeline, they hadn’t had a shot before that,” said Redknapp.

“They came back to 2-1 and it gave them belief. The goal came at the right time for them, it changed their attitude and gave them a massive lift. Before that they were struggling to live with us.”

An own goal from Bremen defender Petri Pasanen and a Peter Crouch header put Spurs ahead before Portugal striker Hugo Almeida pulled one back just prior to the break before Marko Marin hit the equaliser.

“I constantly asked myself how something like this could happen after we did so well in Bayern,” said Werder coach Thomas Schaaf after his side had earned a goalless draw at Bayern Munich last weekend in the Bundesliga.

“We have the quality to come back as we have done before, so we earned the point.”

Both sides came into the Group A match at the Weserstadion with injuries. Spurs were without England striker Jermain Defoe and defender Michael Dawson, who both have ligament damage.

Spurs took the lead when Bale ran deep on the left flank and squared only for Bremen’s Pasanen to stab his shot past goalkeeper Tim Wiese on 12 minutes.

The English side were hitting Bremen constantly with fast breaks and Spurs went further ahead when a cross from van der Vaart found Crouch who leapt higher than Pasanen to head home on 18 minutes.

Tottenham kept up the pressure as Crouch went close again while a rocket shot from Bale forced Wiese into a diving save.

With 35 minutes played, Bremen coach Thomas Schaaf toughened up his midfield with Aaron Hunt on for the inexperienced Philipp Bargfrede and the move paid off. Bremen scored just two minutes before half-time with their first real chance when Almeida latched onto a Wesley cross.

Van der Vaart made way for Robbie Keane just after the break with a calf strain while the hosts began the second-half with a bang.

After Hunt headed over from a corner, Marin fired in a shot from 20 metres out which gave Spurs’ goalkeeper Cudicini no chance on 47 minutes.

In the next round of games, Spurs host Twente on September 29 the same night Bremen are at defending champions Inter Milan.