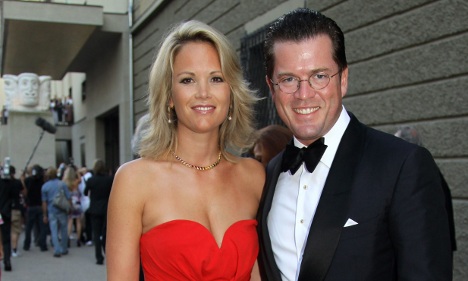 The Guttenbergs at a formal event in Photo: DPA

“When I see nine-year-old girls are already watching Top Model-style shows on television or excitedly discussing the new video clip from Lady Gaga – with black leather corset, suspenders and naked bottom cheeks – then I am really worried about the female role models these children are growing up with,” she wrote in an article for daily Bild to promote her new book on preventing child abuse.

She is also the German chapter president of the international organisation Innocence in Danger, which aims to bring public attention to child victims of sexual abuse and human trafficking.

Guttenberg told Bild, which has naked pictures of women on its front page each day, that the power of sexualised pop culture images over children is underestimated. She said she doubted elementary school girls could understand that “the excessively sexualised physicality of their big idols Heidi Klum and Lady Gaga have nothing to do with them.”

She also said that she feared that such images would lead her two daughters to believe their only worth lies in their sexuality.

Other major concerns about child sexuality include open access to pornography online, she wrote, citing experts who say exposure to this material creates great uncertainty about individual boundaries for young people.