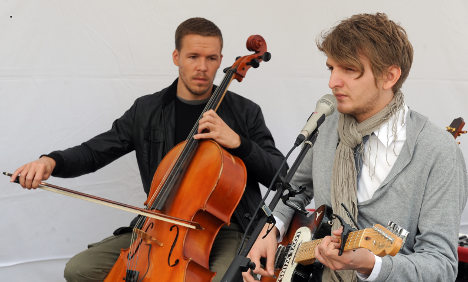 “The band members are happy, but now just want to go to bed,” band spokeswoman Manuela Kohn told news agency DAPD after the trio wrapped up.

The group members were reportedly hoarse and exhausted but happy with their feat.

Led by 24-year-old German singer-songwriter Samuel Harfst, the three musicians began playing on Wednesday at 10:55 am.

Berlin Mayor Klaus Wowereit rang in the concert’s beginning in the entryway of the former Tempelhof Airport with a gong, saying: “I wish you much luck. We’ll see how long you hold out.”

The buskers played their own tunes, as well as covers and songs from other bands, who also accompanied the core musicians throughout the concert.

There was also a constant audience presence.

Two official delegates from the Guinness World Records were also on hand to monitor the performance, the rules of which allowed the musicians to take a five minute break per hour. The performers chose to save up their breaks, though, pausing only every four hours for 20 minutes.

Songs were allowed to be repeated only every four hours, and only 30 seconds of silence were permitted between tunes.

The performance kicked off Popkomm, an international music trade fair. After being cancelled last year, the event was reactivated as part of the first-annual Berlin Music Week, which runs from September 6 to 12, featuring concerts, workshops and lectures around the city.

More than 470 exhibitors from 20 countries will take part in the Popkomm trade fair, about half as many as the number involved in 2008.

Musician Samuel Harfsta is known for being among the top-10 best newcomers in Germany’s MTV Unplugged new musician contest in 2009 for his song “Alles Gute zum Alltag.”