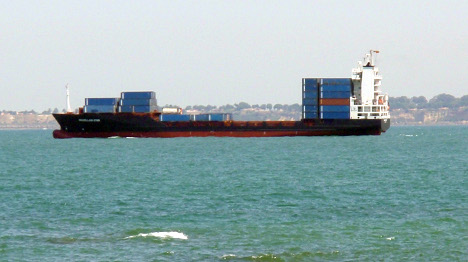 In a pre-dawn raid, Marines “boarded and seized control of the Antigua-Barbuda flagged German-owned vessel M/V Magellan Star from pirates who attacked and boarded the vessel early September 8,” a statement said.

No one was hurt in the operation, in which the Magellan Star’s 10-man crew was freed and nine pirates arrested.

The raid was launched from the USS Dubuque after a Turkish frigate – part of the multinational force – responded to a distress signal from the Magellan Star.

The hijack attempt began after the pirates boarded the 8,000-tonne container ship, Jürgen Salamon, a spokesman for the Quadrant shipping company in the northern German city of Hamburg, told AFP.

“The crew had closed down the engines and locked themselves away in a safe room which the pirates were unable to find,” he said.

After searching the ship for three hours the pirates picked up the phone and called the shipping company asking about the crew’s whereabouts, the spokesman said.

“They were told the crew was on holiday,” he said. “They then asked how to switch the engines back on, but were told they were broken.”

The 11-man crew, comprising two Russians, two Poles, and seven Filipinos, spent the time hidden away in a small, cramped safe room whose entrance was not immediately obvious, the spokesman said.

A multinational force was set up in January 2009 to protect shipping lanes and stamp out piracy in the Gulf of Aden and Indian Ocean.

Unofficial figures show 2009 was the most prolific year yet for Somali pirates, with more than 200 attacks – including 68 successful hijackings – and ransoms believed to exceed €50 million.

At least 23 foreign vessels with more than 411 crew members are still held by pirates, a piracy monitoring organisation, Ecoterra International, said in its latest report on August 31.