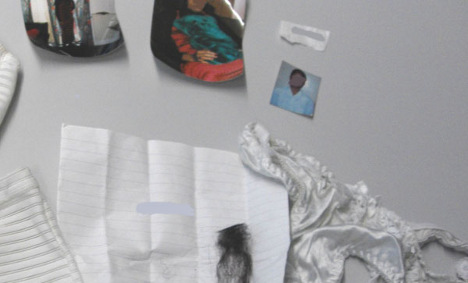 The contents of a 'voodoo packet.' Photo: Polizeipräsidium Bonn

German authorities were first alerted to the exploitation in the winter of 2009 when they arrested 20-year-old prostitute during a routine check at a Bonn bordello for having false identification.

She told officers that her “madam” had forced her into selling sex, handing over all of her earnings and not informing police using “voodoo magic” from the victim’s native country.

“Should she fail to adhere to this, she was threatened with sickness, madness and even death,” police said in a statement.

“The victims believe that the person who possesses these packets exercises power over them,” the police statement said.

Based on this report, police in the state of North Rhine-Westphalia began a wider investigation, uncovering a network of smugglers, human traffickers and money launderers. Officers searched apartments in Berlin, Oberhausen, Duisburg, Essen and Hamburg, the statement said.

The voodoo madam was arrested this May in Koblenz and remains imprisoned on remand, while a second woman was arrested in Hamburg on similar charges.

The cases led to further investigations of human trafficking, money laundering, and violations of immigration laws.

Since then the police have concluded their investigation of the madam and the state prosecutor’s office has pressed charges.

“She will answer for herself before a court soon,” the police statement said.