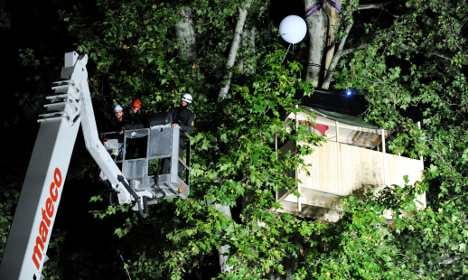 Eleven demonstrators were carried from the tree house in the Schlossgarten park, located next to Stuttgart’s main train station, where they have been living since Friday, police said.

As officers approached, another 100 activists quickly arrived to support the tree inhabitants, forming a sitting blockade around the tree. Among them was Kei Andrews, spokesperson for the environmental protest group Robin Wood, which claims that the park is endangered by the mammoth €4.1-billion rail project.

Just a few hours before project opponents had made the surprise move to cancel a meeting with Baden-Württemburg state leaders and executives from national rail provider Deutsche Bahn on Friday. The groups said they refused to attend the meeting because there would be no immediate stop to construction at the site as they demanded.

The showdown came as the centre-left Social Democratic Party in the state called for a referendum on the project and said it was preparing a corresponding draft bill for the parliament.

The party’s state parliamentarians planned to introduce the bill on Wednesday at 1 pm, a spokesman for the party said Tuesday. Former SPD federal minister for economic co-operation, Erhard Eppler, also called for a referendum.

The spokesman said the move had been co-ordinated with the party’s candidate for premier, Nils Schmid. While the party’s parliamentary group supported the project, it also wanted the people to have a say, the SPD spokesman said.

Meanwhile Matthias von Herrmann, leader of the activist group Parkschützer, or “park protectors,” announced that protesters would be taking harder action against the project, organising more protests to hinder construction.

Before police cleared the tree house protesters, they estimated that some 8,000 activists had gathered again at the entrance to the construction site to blow vuvuzela horns and whistles for their cause. Organisers said that more than 20,000 protestors showed up.

One banner read: “A red card for crappy politics.”

The actions are just the latest in ongoing – and increasingly loud – displays of public ire over plans to make the city of 600,000 a key station on one of the longest high-speed lines in Europe. The 1,500-kilometre railway would link Paris, Strasbourg, Munich, Vienna, Bratislava, and Budapest.