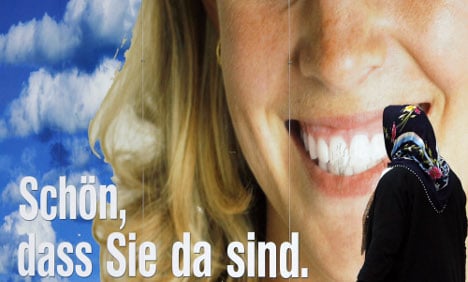 A Muslim woman greeted by a billboard: 'Nice that you're here!' Photo: DPA

Sarrazin is currently under fire for claiming, among other things, that Muslim communities don’t want to integrate with mainstream Germany, that they are making the country “dumber” and that ethnic groups, such as Jews, are distinguished by particular genes.

While politicians on both sides of the issue have discredited Sarrazin’s remarks, recent polls polls have revealed that almost one-fifth of conservative voters support his ideas.

“Our policy requires integration courses and citizenship tests,” Gröhe told the paper. “We also have sanction possibilities for those who persist in refusing to integrate. These must be consistently implemented.”

The Christian Democrats must quickly address their immigration policies to “correct the failures of the past,” he added.

According to Fuchs, consequences for immigrants failing to integrate have not been implemented “intensively enough.”

“When immigrant children are not sent to kindergartens or to school, then cuts to their Hartz IV welfare benefits must be sanctioned,” he told the paper.

Former President of the Bundestag, member of an immigration advisory board, and CDU member Rita Süssmuth also said that her party needed to review its ideas on the topic.

“We’re acting as if we’re addressing it for the first time,” she told daily Der Tagesspiegel. “The government is far too slow and doesn’t implement what we already know.”

Süssmuth also called for a set of criteria for foreigners hoping to come to Germany.

“Germany needs creative minds from abroad,” she told the paper. “We have intentionally kept qualified workers from the job market for a long time, saying they wouldn’t allow themselves to be integrated.”

Germany needs a “paradigm shift” toward becoming a country of immigration, a phrase politicians have resisted for years, she said.