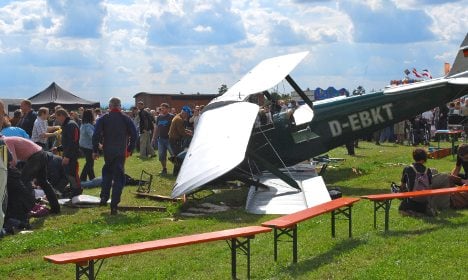 As two biplanes took off for their performance for some 3,500 visitors at the event in Schnaittach, the second pilot lost control for unknown reasons and plummeted into the crowd around 3 pm, police in the southern German state of Bavaria said.

A 46-year-old local woman was killed, while another 38 people were injured, some of them severely, police said. Injuries included broken and crushed bones, and helicopters transported many of the injured to local hospitals, they added.

One of the injured was a 7-year-old boy.

The experienced 68-year-old pilot of the biplane, which was built some 70 years ago, was uninjured.

Local media reported that panic did not break out among the crowd at the sudden accident, though one 43-year-old woman told reporters: “I ran for my life.”

A large contingent of rescue workers was at the scene to treat minor injuries and provide emotional support to spectators, some of whom reportedly suffered from shock.

Meanwhile the Lauf-Lillinghof airfield was shut down for investigation by experts from the German Federal Bureau of Aircraft Accidents Investigation (BFU). Authorities also set up a hotline for relatives of victims of the accident.

After the accident Bavarian Interior Minister Joachim Herrmann visited the scene to speak with relatives of the victims and called for the cause of the accident to be clarified.