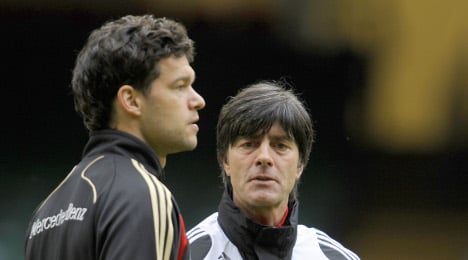 Coach Joachim Löw said on Sunday Ballack remained in his plans for the team despite his continued absence – which is expected to last past Tuesday’s second qualifying match against Azerbaijan in Cologne.

Ballack is still trying to regain fitness after a long period off the pitch following an ankle injury which put him out of this summer’s World Cup in South Africa. He has also transferred from Chelsea to Bayer Leverkusen, for whom he has played once during this new Bundesliga season.

The 33-year-old has been replaced by Sami Khedira in midfield for the national side, but Löw said there was still a place for Ballack.

“I hope the team continues to grow, and that certainly includes Michael,” Löw told the Bild am Sonntag newspaper.

He has already confirmed that Ballack would regain the captaincy from Philipp Lahm when he returns to the national side, despite the fact that he is not yet fit enough to play for his country.

“We must acknowledge that Michael is not yet able to help us, that was clear in his first match (for Bayer Leverkusen) since his ankle injury. Our team progressed enormously during the World Cup, some players like Sami Khedira and Bastian Schweinsteiger raised their game. But I thought about it calmly and it was clear that Michael should remain captain.”

He would not comment on whether Ballack would return to the national team for next month’s matches against Turkey and Kazakhstan.

He favoured the idea of, “a 100 percent strong captain, which has the acceptance of the team, is a regular player and is the spokesman of the trainer,” Kahn told Der Spiegel magazine on Saturday.

The tactic of confirming Ballack as captain, but his degradation to a player without a firm place in the team, was not systematic enough, said Kahn.

A number of observers saw Löw’s lengthy hesitation in making a firm statement on Ballack as an attempt to force him to resign from the national team.

With Ballack’s position in the team no longer a given even when he is again fully fit, Khedira said he would challenge Ballack for the place in midfield, he said.

“Michael Ballack had the same rights to it as I do, to be there and to place. It is a purely sporting competition,” he said.

“That is a healthy competitive situation, which every performance athlete must accept,” he said, adding it was completely normal that the situation with Ballack be carefully examined.