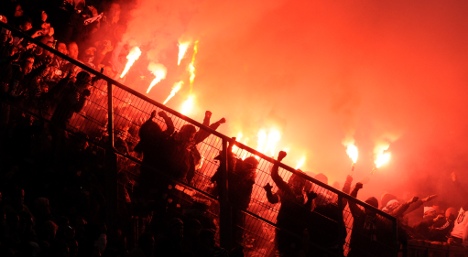 Belgium take on Germany in the Group A qualifier at Brussels’ Stade Roi Baudouin and the authorities have searched trains at the border between the neighbouring countries to ensure the game passes off without incident.

Convicted German hooligans are required to sign in at their local police station on match days when the national side are playing, but police are concerned some known violent fans may still make it to Brussels for the match.

“In cooperation with Belgian colleagues, we are specifically looking for known violent criminals. After each inspection, we bar some people from travelling, which we have already done.”

The police did not say how many German fans had been prevented from travelling so far.

Belgian authorities are concerned some 6,500 tickets, which went on general sale in Belgium, could have been bought by German fans.

The German Football Federation has sold 2,500 tickets to their fans for the match at the 50,000-seater stadium.

The current Stade Roi Baudouin stadium in Brussels has been renamed and renovated since it was the scene of one of football’s worst disasters 25 years ago.

Several hundred people were injured and 39 fans were killed during the Heysel Stadium disaster on 29 May 1985 when a wall collapsed under the pressure of escaping fans in the stadium after rioting before the European Cup Final.

The rioting between Liverpool and Juventus fans led to English clubs being banned for five years and 14 Liverpool fans were found guilty of involuntary-manslaughter after a trial in Belgium.