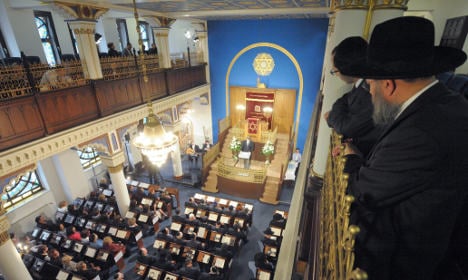 The ordination in Leipzig. Photo: DPA

The Orthodox ordination of the men originally from Uzbekistan and Lithuania was Germany’s second since 1945, underscoring the growth of the city’s Jewish community that 20 years ago numbered only 30.

More than 300 German and foreign Jewish leaders attended the ceremony in a brightly coloured 19th century synagogue that somehow managed to survive the 1938 “Kristallnacht” Nazi pogrom.

In 1939, at the start of World War II, only 200,000 remained as many had emigrated to escape Nazi violence. Just a few thousand survived the war.

Today numbers are back to more than 100,000 since the 1990s decision to make it easier for Jews from the former Soviet Union to move to Germany and to obtain citizenship.

The two new Orthodox rabbis are among the arrivals: Shlomo Afanasev was born 29 years ago in Tashkent and Moshe Baumel, 22, is from Vilnius.

Addressing the young rabbis in the synagogue, Lauder spoke of their journeys to Germany, pointing out that their wives had also came from far and wide: Afanasev’s wife is from Ukraine and Baumel’s from Siberia.

“My message to you is you never know where you’ll end up,” Lauder said.

In the aftermath of World War II and the ravages of the Nazi regime, few would have believed there would be a Jewish renaissance, said Charlotte Knobloch, who heads the Central Council of Jews in Germany.

“In all the Jewish communities I have visited over the past few years I’ve been made aware … of the hope there is of being able to continue to live in a country which has caused so much suffering to our families … and trust in this country, its democracy, and its inhabitants,” she said.

“No one could have imagined that after the war,” she told reporters. “What once was utopia is now reality.”

Knobloch presides over a community in which nine out of 10 people originate in former Soviet states. She was born to a conservative family, but many former Soviet Jews are Orthodox.

“But for a religion, such differences in origin are unimportant,” she told AFP.

“What’s important isn’t where they come from (the rabbis), but where they studied, and whether they were trained as conservatives, liberals or Orthodox,” she added.

In an environment in which many worshippers are immigrants, having two new rabbis from the same background is helpful, said Hermann Simon, who heads the foundation in charge of Berlin’s main synagogue.

“It’s really a good thing that a rabbi can talk (to his flock) in their mother tongue, because sometimes he has to deal with difficult problems,” he said.

One of the new rabbis, Moshe Baumel, opened the ordination ceremony in German, the language he grew up with, having arrived in Germany at the age of three, saying “this isn’t just an ordination festival, but an integration festival.”

Some Germans are still responsible for acts of violence against foreigners or Jews, said Stanislaw Tillich, who heads the regional government of Saxony where neo-Nazis are active.

But, “The duty of democrats is to defend … Judaism in Germany,” he said.

In another event symbolic of Judaism’s return to Germany, President Christian Wulff inaugurated on Friday a new synagogue in the western city of Mainz, on the very site where Nazis destroyed the previous one more than 70 years ago.

“Exactly 98 years after the opening of the last major synagogue in Mainz, the Jewish community once again will have an architectural and religious centre,” Wulff said at the official ceremony.