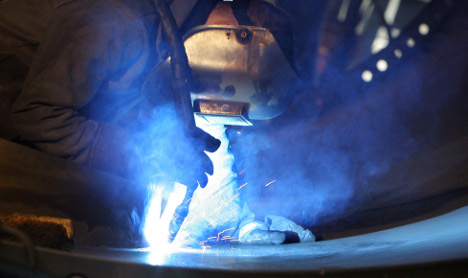 The economy in the 16-nation eurozone grew by 1.0 percent between April and June, compared to quarter-on-quarter growth of 0.4 percent in the United States and 0.1 percent in Japan, the European Union’s data agency said.

Europe was pulled up by Germany’s best quarterly performance since reunification in 1990, with growth of 2.2 percent, according to the Eurostat figures, which confirmed a previous estimate.

But, he cautioned, “the eurozone recovery looks likely to lose some momentum over the coming months in the face of serious headwinds.”

However, he added, “activity will probably lose momentum in the second half of the year.”

Germany’s export-driven economy could feel the pinch from a slowdown in global demand, he said.

“The German locomotive, albeit continuing to outperform its peers, will probably decelerate over the coming quarters,” De Lucia said.

The Eurostat figures showed that the economy of the 27-nation EU, which includes non-euro members Britain and Poland, also grew by 1.0 percent in the second quarter. This compares to growth of 0.3 percent in the first quarter.

Greece was the only nation stuck in recession with an economic contraction of 1.5 percent, as the eurozone member battles to overcome a public deficit and debt crisis with severe spending cuts.

On an annual comparison with the second quarter of 2009, the eurozone economy grew by 1.9 percent in both the eurozone and the wider EU, slightly better than the August previous estimate of 1.7 percent.

The second quarter was marked by a 0.5 percent increase in consumer spending in the eurozone compared to 0.2 perecnt in the previous quarter.

Investments in the single currency area increased by 1.8 percent after a contraction in the first quarter, while exports and imports rose sharply, each by 4.4 percent.