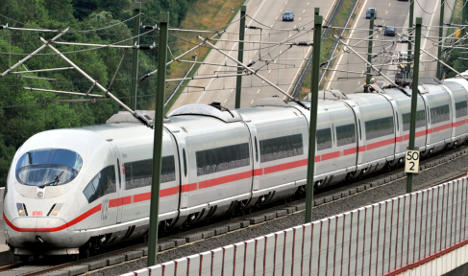 “We have been in talks with Eurotunnel for several months,” Deutsche Bahn CEO Rüdiger Grube told a press conference, referring to the company that operates the link under the English Channel. “In October, we will proceed with a test run in the tunnel with an ICE-3.”

France and Britain have fixed conditions for trains that wish to use the Channel tunnel, in particular their length, that are only met by Eurostar trains that now connect London with Brussels and Paris.

That effectively blocks rivals to Eurostar, owned by France’s state-owned rival SNCF, its Belgian counterpart SNCB and the British group London and Continental Railways. A working group has been established to review the situation, however, and Eurotunnel has called for rival railways to come forward, suggesting the possibility of offering services between London and Amsterdam or Frankfurt.

“I am confident I can count on the support of competitors, including the SNCF,” Grube said.

The Channel Tunnel Intergovernmental Commission, which oversees safety issues, said Deutsche Bahn had not yet been cleared for the test run, with its request only just received. The commission will examine the request before giving Eurotunnel clearance for the test run, it said.

Deutsche Bahn is determined to expand beyond its own borders and is “in talks with the SNCF about a service from Frankfurt to Lyon and Marseille (in southern France) from 2012,” Grube said.

The German group has called repeatedly for access to routes in France as the French company Veolia Transport has risen among the ranks of private transport companies operating in Germany. Deutsche Bahn is also acquiring British bus and rail operator Arriva.

The railway also presented first-half results, including a 13 percent increase in sales to €16.1 billion ($21 billion) and a leap of 26 percent in operating profit to €846 million.

For its part, Eurostar said a just completed reorganisation will allow it to face up to competition better and as it seeks to expand its core Brussel-London-Paris services.

“We will have our own accounts, we will earn our own money and we will be able to invest in the best way for our clients,” Petrovic told news agency AFP.

“Today we serve London, Paris and Brussels and tomorrow we can take on new markets. No decision has been made but the new structure allows us to do it,” he added.