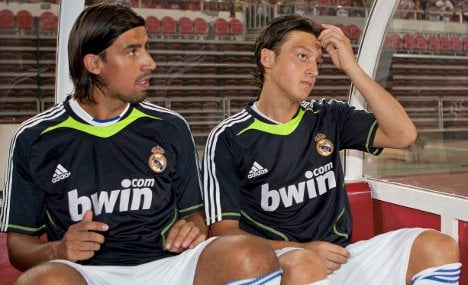 Real coach Mourinho told a Spanish newspaper he is concerned about the German midfielders, who joined Real after the World Cup, as neither can yet speak Spanish and are not mixing with their team-mates.

“The two Germans don’t have an easy life,” Mourinho told Spanish newspaper AS.

“Their participation socially in the squad is zero. Özil lives with Khedira and Khedira with Özil. They don’t speak Spanish, they say ‘buenos dias’ and ‘hola’ and that is about it. They do not even speak English. They speak English a little better than Spanish, but it is difficult to communicate with them,” he said.

Having both enhanced their reputations with stellar performances at the World Cup in South Africa, Özil and Khedira will play for Germany against Belgium in Brussels on Friday in the first Euro 2012 qualifier.

Löw has said the pair cannot be expected to have learnt Spanish already having only joined Real in the last few months and added he could not understand Mourinho’s concerns.

“You cannot expect that a player can speak a new language after only three or four weeks in a foreign country,” said Löw. “I have spoken with them and they impressed me. They told me that they were very well received at Real.”

Both Özil and Khedira came off the bench in the second-half of Real’s 0-0 draw with Mallorca at the weekend and Khedira missed his best chance to score with a header.

The pair flew into Frankfurt on Tuesday to meet up with the national side before the trip to Brussels and insisted they were enjoying life in Spain and were eager to work on the language.

“It’s colder in Germany, but it’s very nice to be back amongst German colleagues,” said Khedira, who has found an apartment for him and Özil and said he wants to learn the language as quickly as possible.