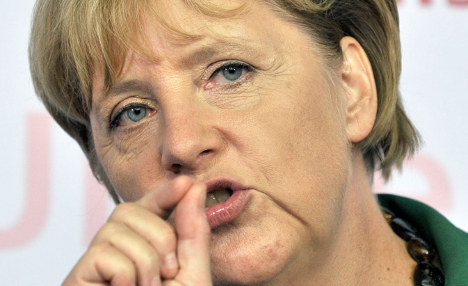 The €80-billion ($102-billion) package of spending cuts over the period 2011 to 2014 include big cuts in unemployment and parental leave benefits, while ministers were told to tighten their belts across the board.

In a poll by the television channel ARD when the plans were first unveiled in June, 79 percent of Germans said the austerity plan was not socially balanced, while tens of thousands of people took part in demonstrations.

“We are convinced that budgetary consolidation, fiscal stability, is one of the most important principles guaranteeing a strong and safe euro,” Merkel said in Berlin on Wednesday after talks with Finnish Prime Minister Mari Johanna Kiviniemi.

Much of Merkel’s plans are also reliant on measures that are still in the works, slowed down by squabbling among ministers in her fractious centre-right coalition, in office since October.

Most controversially, Finance Minister Wolfgang Schäuble’s sums foresee tapping German energy firms for billions of euros in return for extending the lifetime of nuclear plants beyond a planned phase-out around 2020.

The utility companies are putting all their considerable lobbying powers into resisting such a levy, while postponing the date on which Germany goes nuclear-free is likely to go down very badly with many voters, surveys show. The nuclear tax was not part of what the cabinet approved.

In military spending, Defence Minister Karl-Theodor zu Guttenberg’s proposals for doing away with conscription are provoking strong resistance even within government ranks.

Also on the income side, Berlin wants to raise funds from new taxes on financial transactions and a levy on flights, earning Merkel the ire of banks and airlines.

Germany has been cut some slack, however, by a surprisingly strong recovery, with gross domestic product (GDP) expanding a record 2.2 percent in the second quarter, the fastest expansion since reunification in 1990.

Schäuble said on Wednesday that this has proved the government right.

“Internationally, there was a strong debate about our reductions to our public deficit supposedly being too early, too big and too quick, and that we were not doing enough for growth in Europe and in the globalised world.

“This debate has since quietened down … I have repeatedly told my colleagues from other countries that one of the biggest barriers to growth and to domestic demand is growing insecurity among the population about high deficits,” he told reporters.

He warned that the high growth rate of the second quarter would not be repeated in the coming year, but that Germany was “on the right path” and was the “growth engine of Europe.”

“In the view of the German government a growth-friendly deficit reduction is an essential and the most important to ensure a sustainable and favourable economic development.” he said.

“I remind you that in 2009, GDP contracted by 4.7 percent, a drop that in the history of the Federal Republic had seemed unimaginable … Now that the crisis is over, we have to implement an internationally coordinated exit strategy step by step in order to reduce excessive deficits.”

Schäuble also rejected accusations that Berlin was depending too heavily on exports for growth while not doing enough to boost demand among German shoppers for goods made in other countries.

“We had the highest level of imports (in the second quarter) in the history of the Federal Republic. This shows that we are living up to our responsibilities.”