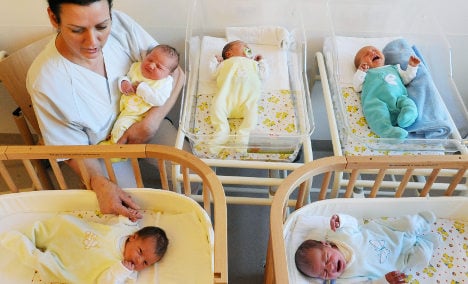 The number of childless Germans who expressed the wish to start a family jumped nine percentage points in just two years, the survey conducted by the Allensbach Institute for Public Opinion and released by the ministry this week found. This year 52 percent of the childless poll participants said they “definitely” planned on at least on baby, up from 43 percent in 2008.

Young men in particular showed an increased will to reproduce, with 48 percent saying they “definitely want children” – up from 37 percent in 2008, the study said.

Just 20 percent of the childless poll participants said they had ruled out the prospect of kids, about the same number as in 2008.

Meanwhile the majority of Germans (78 percent), said that family was the most important thing in their lives, ahead of health, financial security, and friendships.

The family’s central role also revealed itself in parents’ desire to improve the balance between their careers and time spent with children. Eighty-seven percent said that this presented a “very important” or “important” challenge for the future.

Meanwhile 69 percent of the total population and 78 percent of parents said they would like to see the issue be a focal point in German politics.

“How happy families are relies especially on whether they can spend enough time with their children and relatives,” Family Minister Kristina Schröder told daily Süddeutsche Zeitung.

This wish was most pronounced among fathers, with 60 percent admitting they would like to reduce their working hours. Three-quarters of mothers with children younger than 18, on the other hand, said they would prefer to work more than part-time, the study found.

More than 50 percent of mothers also said that they would like full-time child care and working hours that better suit school and day care schedules.

“For this we need more flexible working hours and a business culture that seeks quality work and not just the presence of workers,” Schröder told journalists. “We are still significantly removed from fair chances for mothers and fathers.”

The minister pointed to her Flexible Arbeitszeiten, or “Flexible working hours,” initiative as one step towards this goal. The programme aims to begin helping more parents work part-time beginning in October.

A total of 1,814 people were polled between April 10-23, among them 435 mothers and fathers of children younger than 18. It was the third such poll conducted by the institute for the Family Ministry.