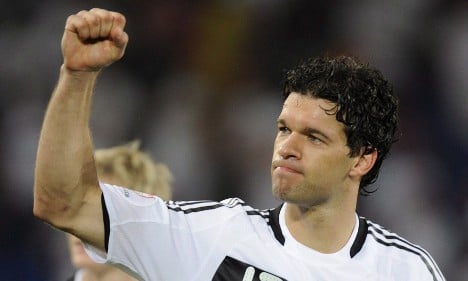 Ballack, 33, has been dropped for the first two games against Belgium in Brussels on Friday and Azerbaijan at home four days later as he continues his recovery from the ankle injury that kept him out of the World Cup.

“In the last few days, I have had an open and honest discussion with Michael Ballack, which lasted two hours, and I have decided that he will remain captain,” said Löw in a press conference in Frankfurt.

With Germany now bidding for a place at Euro 2012, to be held in the Ukraine and Poland, Philipp Lahm will be the temporary national captain until Ballack returns from injury.

In Ballack’s absence, Bayern Munich defender Lahm, 26, captained Germany to third in South Africa at the World Cup, sweeping aside England 4-1 and Argentina 4-0 before losing to eventual winners Spain in the semi-finals.

Ballack is expected to return for Euro 2012 qualifiers against Turkey and Kazakhstan in October, but needs to prove his fitness with Bayer Leverkusen in the Bundesliga.

“He has had a long injury break, but I feel he still as plenty to offer this team,” Löw said. “When he is not available, Philipp Lahm, who did very well at the World Cup, will be captain with Bastian Schweinsteiger as his deputy.”

Ballack, who is now back in Germany playing for Leverkusen after his contract at Chelsea expired at the end of last season, has something of a history of clashing with other players, as well as with Löw.

Things have not got off to a flying start for Ballack’s return to the Bundesliga as Leverkusen were beaten 6-3 by Mönchengladbach on Sunday – and Ballack was booed off when he was replaced in the second-half.

Meanwhile, Löw also confirmed Schalke 04 goalkeeper Manuel Neuer will remain between the posts for the national side with Rene Adler and Tim Wiese battling to be the reserve goalkeeper.

“Manuel will remain in goal, but we are in a luxury position with three goalkeepers who all have international experience and in this area, we are very strong,” said Löw.