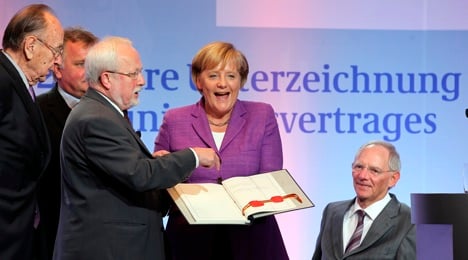 Interior Minister Thomas de Maiziere, in a speech at the Kronprinzpalast in Berlin where the treaty was signed, said it marked “unification” of the two countries rather membership of one to the other.

But he admitted that mistakes were made, adding that “Germany might have adopted more from East Germany than just the little green man,” a symbol on traffic lights indicating when pedestrians may cross a road. The Amplemann is one of the few cultural artifacts to have survived the

The treaty was signed less than a year after the fall of the Berlin Wall, and just two months before the reunification of the two halves of Germany, on October 3, 1990.

But the state premier of Brandenburg, the region surrounding Berlin which used to belong to East Germany, this week spoke of the “annexation” by West Germany of the East.

In an interview with Der Spiegel magazine, Matthias Platzeck, a Social Democrat, used the highly evocative word Anschluss which reminds Germans of Hitler’s annexation of his birth country Austria in 1938.

The day of the signing of the treaty also marked the beginning of “de-industralisation of East Germany,” Platzeck said.

“Unemployment came to nearly every family. For many of us this day isn’t just one of good thoughts,” he added.

Twenty years after reunification, the unemployment rate is twice as high in the East as in the West.

According to a study out Tuesday, nearly one in 10 Germans wishes there were still two countries.

‘Social report 2010’, a series of polls by the Federal Association for Solidarity, found nine percent of eastern Germans wanted East Germany back and 11 percent of western Germans wished the Wall were still in place.