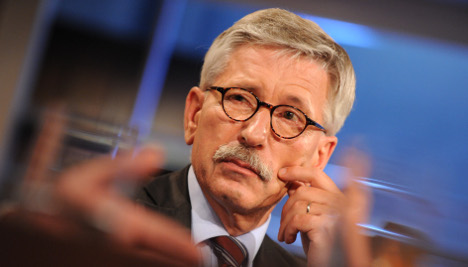 Joachim Vetter, chairman of the Federal Association of Labour Judges, told the Neue Osnabrücker Zeitung that however absurd Sarrazin’s remarks might be, they probably didn’t suffice legally to dismiss him.

In a statement issued late Monday, the Bundesbank said it “distances itself categorically from discriminatory remarks” made by Sarrazin but remained vague on whether it would sack him.

“The Executive Board of the Deutsche Bundesbank will immediately conduct a discussion with Dr. Sarrazin, give him a hearing and take prompt further action,” it said.

The statement followed widespread outrage that erupted after Sarrazin told a weekend newspaper that races were distinguished by a particular gene such as “a Jewish gene.” The remark followed a string of controversial remarks he has made about Muslims and integration in Germany.

Sarrazin stood by his views on Monday when he launched his book Deutschland schafft sich ab – Wie wir unser Land aufs Spiel setzen, or “Abolishing Germany – How we’re putting our country in jeopardy.”

Judge Vetter said breaches of the Bundesbank’s internal code of conduct were not grounds alone to dismiss Sarrazin.

“A requirement for (sacking) would be be serious misconduct relating to official business,” he said.

It was doubtful whether private opinions unrelated to the office constituted such a breach, he said.

Most media are reporting that Germany’s president, Christian Wulff, would in fact have to sign off on Sarrazin’s dismissal. Wulff’s office declined to comment to news agency DPA.

The centre-left Social Democratic Party (SPD), of which Sarrazin is a member and for whom he was Finance Minister for Berlin from 2002 to 2009, has begun proceedings to expel the renegade politician. Party boss Sigmar Gabriel said Sarrazin had crossed a “red line.”

But in a rare show of support for Sarrazin, the SPD mayor of Berlin’s Neukölln district, Heinz Buschkowsky, who is himself known for blunt – though usually more constructive – remarks on integration, criticised the expulsion proceedings.

“A Volkspartei (people’s party) that has broad wings must put up with uncomfortable and disturbing discussion,” he told broadcaster ARD.

The government’s integration commissioner, Maria Böhmer of the conservative Christian Democrats, said: “For me, he is no longer acceptable as a Bundesbank board member.”

Böhmer told the Ruhr Nachrichten that other statements by Sarrazin on heredity and intelligence – implying that some races were more intelligent than others – were “plainly and simply untenable.”

That view was echoed by Markus Nöthen, the Director of the Institute for Human Genetics at the University of Bonn. The thesis that whole ethnic groups were genetically smarter than others was “absurd,” he told the Kölner Stadt-Anzeiger.

“Hundreds of genes are involved in highly complex traits such as intelligence,” he said.