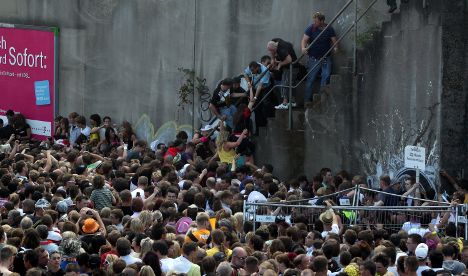 The firm Lopavent presents its version of how the tragedy happened on its website, pointing to the barrier chain set up by police as the likely cause of the deadly crush.

The fitness studio entrepreneur and owner of Lopavent, Rainer Schaller, told news magazine Der Spiegel that as organiser, he felt he had a moral responsibility to get to the bottom of the tragedy.

“None of us can understand why the police put up the chain in the tunnel and what function the chain at the lower end of the ramp was suppose to have. I believe that without this chain, the 21 people would still be alive today.”

Along with 22 hours of raw, unedited footage from seven separate cameras, Lopavent has also posted its own six-minute explanatory video with graphics and video images presenting its own version of what went wrong. The video is accompanied by a polished English as well as German commentary.

It portrays the police chain on the ramp to the main dance area as the main cause of the tragedy. The site also offers a chronology of events and background information including original documents, graphics and media reports.

The videos run only to 4:40 pm – about 20 minutes before the first death happened – apparently out of respect for the victims.

The website states: “Just like the victims’ families, the participants and the general public, we, too, must understand what happened on 24 July 2010. This website is an expression of the fact that we accept this responsibility.

“The Love Parade organisers will do everything in their power to support the public prosecutor’s office in conducting a thorough investigation.”

However the commentary on the edited video squarely points to the police chains at either end of the tunnel as the reason for the deadly crush.

Thirteen women and eight men were killed and more than 500 others injured after a mass panic broke out at the techno music festival in the Ruhr Valley city of Duisburg. Since then, organisers, police and city officials have sought to blame on another for the tragedy.

Police representatives hit back angrily on Monday against Lopavent’s website.

Officers had in some cases put their own lives on the line to prevent the worst outcomes of the sloppy planning by organisers, said Rainer Wendt, head of the German Police Union.

It was clear from many television reports that police “were literally overrun, as they had undertaken the effort to prevent further influxes into the area.”

The chief of the North Rhine-Westphalian police, Dieter Wehe, said of Schaller: “His remarks were not better just because he repeated them.”

A spokesman for the Interior Ministry in Düsseldorf said he did not want to pre-empt a meeting this Thursday of the interior committee of the North Rhine-Westphalian parliament.

“The police will inform the parliament and the public at the interior committee (meeting) and thereby explain the facts,” he said.

Interior Minister Ralf Jäger has in recent weeks has rejected attacks against the police and instead emphasised the responsibility of the organisers.